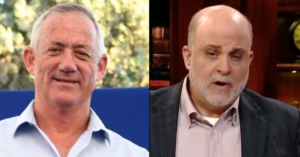 “I don’t think the Israelis are spying on us,” Trump told reporters on the South Lawn of the White House. “I really would find that hard to believe.”

Mark Levin, an American lawyer, author & radio personality, is the host of a nationally syndicated U.S. radio show The Mark Levin Show, as well as Fox News’ globally broadcasted Life, Liberty & Levin, worked in the administration of President Ronald Reagan and was a chief of staff for Attorney General, Edwin Meese.