Israel uses its water industry to connect to countries that otherwise might hesitate to have ties with the Jewish state.

TEL AVIV – Israel‘s national water company Mekorot wants to use its expertise in finding unconventional sources for clean water to help it expand globally, as countries step up their efforts to avoid water shortages.

A rise in population along with climate changes threatens the earth’s freshwater supply in the coming decades and the Organization for Economic Cooperation and Development projects that by 2050 global water demand will increase by 55 percent.

Mekorot says it will cost the world $800 billion in damages. 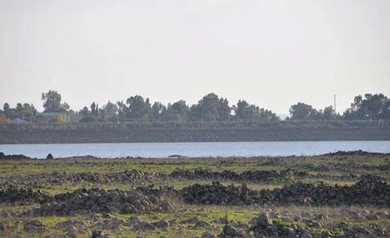 Chairman Alex Wiznitzer on Wednesday met OECD Secretary-General Angel Gurria, who is looking for ways to stave off a calamity, as he visited Israel.

“The organization is interested in disseminating Israeli know-how and technologies to third world countries as part of an effort to deal with the global water crisis,” Gurria said in a statement.

Wiznitzer told Reuters: “The underdeveloped world doesn’t understand that water is the number one problem in the world. Not oil. Not gas. Not other resources. Water.”

“I am sure we can contribute there and even flourish,” he added, in an interview at his Tel Aviv office.

Israel has already developed a billion-dollar industry by marketing its skills and technologies in fields like wastewater reuse, water security and desalination, and Wiznitzer spends much of his time abroad selling Mekorot’s services to governments who want to make water management a priority.

Mekorot is responsible for nearly every aspect of water management in Israel, which faced six years of drought before a rainy 2012. The state company helped build a network of some of the world’s biggest desalination plants and wastewater facilities, even raising the possibility of exporting water to neighbors.

It will invest a further $1.5 billion by 2016 to help reach the target of reclaiming 90 percent of Israel’s wastewater, primarily for irrigation, by far the highest level in the world. It reuses 75 percent, the company says, with Spain a distant second at 12 percent.

That achievement has created a reputation abroad and Mekorot is closing deals on hundreds of millions of dollars in projects in the developed and undeveloped world, Wiznitzer said.

In nearby Cyprus, Mekorot will build and operate two desalination plants that will supply almost half of the country’s drinking water, Wiznitzer said. He expects to close within days a $180 million deal to build a facility to filter the water of the La Plata river that flows near Buenos Aires.

“There is no other national water company in the world that deals with all the different disciplines at once,” Wiznitzer said, adding that he saw this as one key to Mekorot’s success.

The other is that Mekorot is open to smaller projects that would pass under the radars of larger competitors, like France’s Veolia and Suez Environnement.

“It’s happened many times that we have taken jobs the others didn’t want to waste their time on,” he said.

Beyond the source of revenues, Israel uses its water industry to connect to countries that otherwise might hesitate to have ties with the Jewish state.

Mekorot’s capabilities, along with those of a growing number of smaller Israeli water technology companies, are in high demand, said Oded Distel, who runs the government’s program to promote clean technologies. They benefit from being in a field that “lends itself to cooperation”, he said.

Wiznitzer took it a step further, saying Mekorot’s work could help create contacts in Arab countries around the Middle East, which the United Nations has called the world’s most water-stressed region.

Mekorot is also tasked with protecting Israel’s water sources, which if tampered with could potentially spark a regional war.