The ministerial committee tasked with selecting the list of Palestinian security prisoners to be released is scheduled to meet on Saturday night to decide on those to be freed late Monday night, in the third out of four such releases. 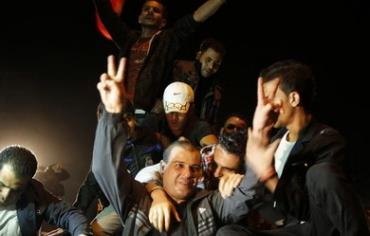 A released Palestinian prisoner at the Erez crossing between Israel and the northern Gaza Strip. – Photo: REUTERS

Soon after the prisoner release, Israel is expected to announce plans for construction beyond the Green Line.

Channel 2 reported that the announcement will include 600 new housing units in Jerusalem and 800 in the settlement blocs. In addition, the reports said, planning processes will be set in motion for another 1,000 units.

Chief PLO negotiator Saeb Erekat responded to Israel’s intentions to announce construction plans by labeling settlement construction a “war crime.” Erekat said if Israel goes ahead with the plans, the PA leadership should apply for membership in 63 international organizations, including the International Criminal Court.

Erekat said those who fear the ICC should “stop perpetrating war crimes, including settlement construction, which is a war crime.”

Referring to the Israeli plans, Erekat said, “We strongly condemn this and consider it damaging for the peace process.”

One government official responded by saying that going to an international body would be a direct PA contravention of the agreement reached with Israel and the US, which paved the way in July to the current round of negotiations. On the contrary, he said, Israel made no commitment to freeze settlement construction, and was “scrupulously” upholding the agreements.

The US administration has made clear that while they are opposed to settlement construction, these types of announcements do not take anyone by surprise or contravene the July agreement to restart the talks.

“There does not need to be a connection between building in the territories and releasing prisoners,” she said. “As long as there is no agreement with the Palestinians on the future of the settlements, expanding settlements is adding insult to injury.”

Likud MK Moshe Feiglin also said that settlement construction and prisoner releases should not be connected.

“Construction in Judea and Samaria in exchange for terrorists perverts the value of settlement,” he wrote on Twitter.

Once the ministerial committee draws up the names of the prisoners – all convicted terrorists who carried out their activities before the 1993 Oslo Accords – the families of the victims will have 48 hours to petition against their release to the Supreme Court.

It is highly unlikely the court will intervene.

The Supreme Court rejected a petition on Thursday brought by five members of the Schijveschuurder family – whose parents and three siblings were among the 15 people killed in the 2001 suicide attack at the Sbarro restaurant in Jerusalem – to reconsider releasing another batch of prisoners.

“With all due understanding to the pain of the petitioners, their petition does not raise any legal ground for our intervention,” the court ruled. “The claims have been raised and ruled on in the past regarding the same government decision.”

Under the agreement drawn up in July, and confirmed by the government, Israel is to release a total of 104 prisoners, in four different groups, during the nine months of negotiations.

Two groups of 26 prisoners each have already been let go.

Netanyahu, meanwhile, addressed the diplomatic process and the uptick in terrorism during a speech at a graduation ceremony for new IAF cadets at the Hatzerim Air Force base in the South.

“We know that in any peace agreement, if it will be reached, Israel needs to be the one to defend itself, by itself,” he said, in an apparent reference to his demand for a long-term IDF presence along the Jordan River.

The prime minister, speaking before two rockets were fired from Gaza Thursday evening, said Israel held Hamas responsible for all attacks from the Gaza Strip. “We will hit those who attack us, and also those who give them cover. No one will have immunity,” he said.

Meanwhile, The Palestinian Authority on Thursday denied that PA President Mahmoud Abbas and Netanyahu have been conducting secret talks.

Nabil Abu Rudaineh, a spokesman for Abbas, said the Palestinians were not conducting any behind-the-scenes negotiations with Israel.

The denial came in response to a report in Yediot Aharonot, which revealed that Netanyahu and Abbas have been maintaining a secret channel of talks for several years. According to the report, attorney Yitzhak Molcho, Netanyahu’s confidant, has been traveling to London from time to time and meeting with one of Abbas’s associates.

According to the report, the channel was especially important during the first four years of Netanyahu’s current term in office, when there were no negotiations with the Palestinians.

This back-channel diplomacy included an exchange of messages and ideas and was aimed at solving problems troubling both sides, the report said.

A source told the paper that Bassel Aqel, a Palestinian businessman living in London, may have been Abbas’s representative to the secret talks. It said that there were three goals to back-channel diplomacy: solving daily problems on the ground; preparing the ground for a major diplomatic breakthrough; and creating an impression among those involved in the secret talks that there was an interest in making political progress while the formal negotiations were deadlocked.

Abbas told a delegate from Tel Aviv University’s Institute for International Security Studies he met in Ramallah on Thursday that the report was not true.

Officials in the Prime Minister’s Office would neither confirm nor deny the report.

Abbas also told the INSS delegation that while he did not in principle reject the idea of a “framework agreement,” the period of time between which the sides move from the current situation to a permanent agreement must not be more than three years.