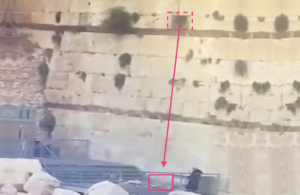 The egalitarian section, known as the “Ezrat Yisrael” prayer platform, has existed as a place for progressive Jewish prayer since 2000, but was substantially upgraded in 2013 by then-Diaspora affairs minister Naftali Bennett.

The stone fell meters away from a woman who was praying, and security cameras show her fleeing the site in panic.

Tisha Be’av is one of the most crowded days of the year at the Kotel.

“Had it happened yesterday when there were many people praying, there could have been a disaster.”

Rabbi Shmuel Rabinovitch, the rabbi of the Western Wall, referred to the event as “exceptional and rare,” one that has not happened in decades and which is beyond his understanding.

“The fact that such a powerful event took place after the fast of Tisha Be’av, in which we mourned the destruction of our temple, raises questions which the human soul is too small to contain, and which demand cheshbon nefesh [accounting of the soul].”

“I thank the Almighty for preventing a major disaster,” he said, and added that the Antiquities Authority, the police and the Jerusalem municipality will be investigating the incident.

Knesset member Yehudah Glick called it a “very frightening incident,” and said he does not understand “what God means [to convey].”

The Knesset recently approved a move to renovate the egalitarian section, despite opposition from a number of politicians, most prominently Culture and Sport Minister Miri Regev.

Jeremy Sharon contributed to this report.