In promotion of ‘Israeli Apartheid Week’, mock notices saying, ‘Your suite is scheduled for demolition,’ are  posted on Harvard student dorms.

WASHINGTON – The battle for the American student public continues, with pro-Palestinian Harvard students posting mock eviction notices on the doors of student dorms on campus, warning students their homes are scheduled for demolition. 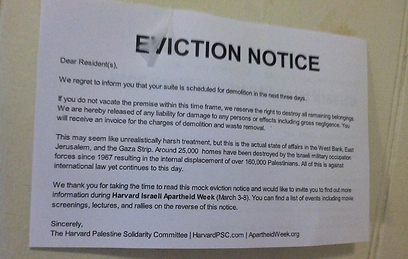 “This may seem harsh, but this is the state of affairs in the West Bank,” say the notices posted on March 2, promoting the “Israeli Apartheid Week” organized by the Harvard Palestine Solidarity Committee.

Rabbi Jonah Steinberg, head of the “Hillel” Jewish students organization in Harvard, sais this is an all too familiar tactic: “Had the group placed its flyers on bulletin boards, there would be no violation of University policy, no warning from administrators in reply, and no big story about ‘Israel Apartheid Week’ in the campus or national news.”

Should the university respond harshly to the action or the contents of the “Israeli Apartheid Week,” Steinberg said, “then the group can allege that they are being singled out for official censure, that the University is complicit with the Israeli actions they decry, that their freedom of speech is being abrogated.”

Robert Trestan, acting director of the Anti Defamation League’s New England region, said that “This tactic is designed to silence and intimidate pro-Israel advocates at Harvard and campuses around the country.”

The “Israeli Apartheid Week” events, which are scheduled to kick off Thursday at Harvard, include an “apartheid wall” in the shape of the West Bank security fence, which will be set up in a campus plaza; a screening of Academy Award-nominated documentary “Five Broken Cameras,” a joint Israeli-Palestinian production; and a lecture by renowned Jewish leftist and linguist Noam Chomsky.

Shai Bazak, Israel’s consul general to New England, said: “These movements are very weak, and the campus’s trend clearly leans toward Israel. They are creating provocations which do not exemplify the atmosphere at Harvard.

“Students are mostly uninterested, and if they are, they are mostly on our side,” said the consul.

The “Apartheid Week” in the US started on the West Coast and is now moving to the East, with most of the activity concentrated in a handful of universities in the Boston area, at George Mason University near Washington DC and in UCLA.

The pro-Palestinian activists are trying to promote anti-Israel sanctions in academic institutions in the spirit of the BDS movement, but their efforts have so far failed.

In the last three years several student bodies have made anti-Israeli resolutions, but these were not implemented due to the university administration’s objections.

So far, said an Israeli diplomat on the West Coast, the publicity the activists are getting is mostly due to the organized Jewish response.