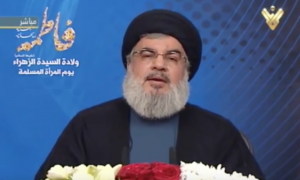 “We will soon celebrate a victory on Syrian soil,” said the head of the Lebanon-based terrorist group in a televised speech marking the 12th anniversary of the Second Lebanon War, while claiming that Israel has been “deterred” since being “defeated” by Hezbollah in 2006.

“12 years have passed and Israel is still threatening us with war. Israel talks about the strengthening of Hezbollah and its capabilities so much that one of the senior officers in Israel said that Hezbollah is the second most powerful army in the region after the IDF,” Nasrallah continued.

Nasrallah then mocked Prime Minister Binyamin Netanyahu and said, “The campaign he is waging every day is a beggar’s campaign. His policy is that Iran and Hezbollah should not remain in Syria. That’s his problem today – how to get Iran and Hezbollah out of Syria.”

“Listen to the insolence: Israel who was defeated in Syria is trying to impose conditions, it has demands. You lost, you have been defeated, your gamble failed, your hopes have disappeared, and you are giving conditions? The era in which Israel can impose its conditions is over,” he declared.

Nasrallah regularly threatens Israel and boasts of his group’s power, though he has been forced to hide in a bunker ever since the 2006 war.

Two years ago he denied that he had been hiding in an underground bunker for a decade.

Hezbollah is a vital ally of the Assad regime in Syria, having sent its terrorists to fight alongside Syrian troops and sustaining heavy losses along the way.