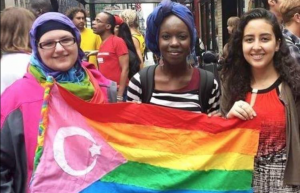 According to a report in The Windy City Times, the three members were told to leave the parade because the flags “made people feel unsafe” and that the Dyke March was a “anti-Zionist, pro-Palestinian” space.

As would be expected, Jews around the world have been up in arms about this blatant bias against a symbol that represents Jews across political and religious spectrums. On Monday, Muslim activist and blogger Nadiya Al-Noor took to Facebook to publicly decry this suppression of religious freedom as well.

“This is my pride flag,” she wrote as caption for a photo of herself with two friends holding a rainbow flag with the Muslim crescent moon overlaid. “It has the Islamic crescent and star on it, like the flags of Turkey, Pakistan, etc… Should I and my flag be banned from Pride because of the countless horrific murders of LGBT people in Muslim countries, the state-sanctioned hatred and persecution of LGBT people? Because if you ban Jews and Jewish flags because you hate Israel, logically you have to ban me, too. Or you could just admit you’re antisemites. What will it be? #DykeMarchChicago.”

On her website, Al-Noor describes herself as a “young Muslim interfaith activist” and “Muslim Zionist” who “actively supports peace between Israel and the Palestinians.” As of this report, the post had been shared nearly 2.5 thousand times.

Dyke March organizers issued a statement on Twitter that the participants had been removed “after they repeatedly expressed support for Zionism.” The event’s official Twitter account also reiterated that Jews were welcome at their events… as long as they were anti-Zionist.

AND EVEN THO THIS SHOULD BE OBVIOUS, QUEER AND TRANS ANTI-ZIONIST JEWISH FOLKS ARE WELCOME HERE 💖💖💖 WE LOVE YOU AND NEED YOU

Their posts made no apparent mention of other political affiliations, regardless of if they may be perceived as negligent of LGBTQ rights. They did, however, retweet a slew of Electronic Intifada articles supporting their efforts.

On Monday, The Anti-Defamation League demanded an apology from the march organizers. “It is outrageous that while celebrating LGBTQ pride, Jewish participants carrying a rainbow Star of David flag were asked to leave the Chicago Dyke March… both the act and the explanation were antisemitic, plain and simple.”