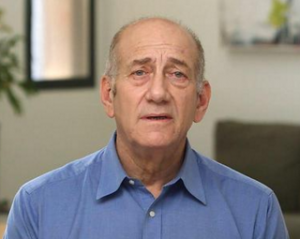 Former prime minister Ehud Olmert on Monday headed to prison to begin a 19-month sentence for bribery. Olmert released a video before heading to prison in which he denied criminal wrongdoing.

“No one is above the law,” Olmert said in the video. “I made mistakes, but they were not criminal in nature. I reject outright the charges related to bribery.”

Olmert, who was originally sentenced to six months before the Supreme Court partly overturned his sentence in December, said in the video: “This morning I will enter prison to serve my sentence. My guards from the dignitary protection unit will escort me there, and Prison Service guards will guard me throughout the time of imprisonment.”

“As prime minister, I was entrusted with the supreme responsibility of protecting the citizens of Israel, and today it is I who is about to be closed behind bars,” continued Olmert. “You can probably imagine how much this change is painful and strange for me, for my family, and for my loved ones and my supporters.”

“It’s important to me at this point to say again, as I have said in the court and outside of it, that I reject outright the charges related to bribery. It is also important to emphasize that none of the charges of which I was convicted was related to my activity during the period in which I served as prime minister.”

“It was a great privilege to serve the public as a member of Knesset, as a minister, as mayor of Jerusalem and as prime minister of Israel,” said Olmert. “I was fortunate to take part in a variety of exciting and significant steps for Israeli society.” 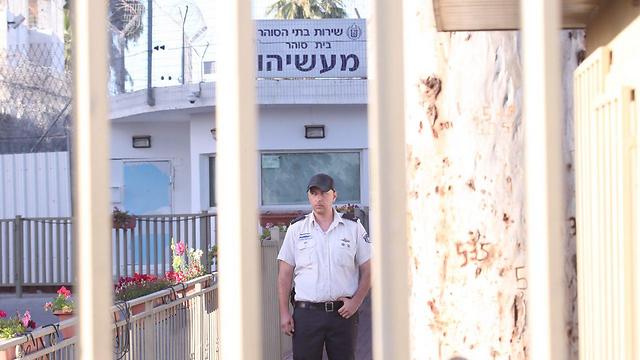 “During my prolific activity,” continued Olmert, “I also made mistakes, even though in my opinion they were not of a criminal nature. Today I am paying a high price for some of them, perhaps too high. I accept the sentence with a very heavy heart, but no one stands above the law.

“I chose of my own free will to serve as a public figure,” the former leader went on, “a path that features many challenges and satisfaction, alongside heavy prices. One of these is the creation of an image that doesn’t properly represent the complexities of my life, my personality, and my choices. To my dismay, I have been saddled with a label of a corrupt person in the past few years. But my term as prime minister ended prematurely, in the shadow of police investigations, and today I am a former prime minister who is about to serve a prison sentence.”

Olmert emphasized that “this is an unusual and severe measure, which some will see as confirmation of the Israeli democracy’s strength. I ask in the same breath to bring up the possibility that the legal snowball of my affairs went on and grew for a variety of additional reasons that were not just legal. Maybe when the storm quiets down and attention returns  to normal proportions, some of the things may get another interpretation, and more sane proportions. Perhaps with more distance, the public will be able to examine this dire moment with a critical and balanced look. I believe that Israeli democracy needs that as well.”

The Prison Service said that it will be responsible for protecting the former premier as soon as he begins serving his sentence. As per Shin Bet instructions, Olmert is to reside in an isolated wing built to house him. Prison Service officials said Olmert is to be isolated from other prisoners and staff, making him far more isolated than most prisoners. They also said the prisoner’s cell will likely have a small fitness room, possibly a short walking path, and a dining nook.

Olmert was convicted in March 2014 in a wide-ranging case that accused him of accepting bribes to promote a controversial real-estate project in Jerusalem. The charges pertained to a period when he was mayor of Jerusalem and trade minister, years before he became prime minister in 2006, a point he reiterated in his video statement Monday.

He was initially sentenced to six years in the case, but the Supreme Court later upheld a lesser charge, reducing the sentence to 18 months. That was extended by a month earlier this year for pressuring a confidant not to testify in multiple legal cases against him.

Olmert is also awaiting a ruling in an appeal in a separate case, in which he was sentenced to eight months in prison for unlawfully accepting money from a US supporter.

He was forced to resign in early 2009 amid the corruption allegations, which undermined the last serious round of Israeli-Palestinian peace talks and cleared the way for hard-liner Benjamin Netanyahu’s rise to power.