The group of 232 Olim [New Immigrants],  from New York’s JFK airport, that include 29 families, 86 singles and 59 ‘Lone Soldiers’ landed today in the Jewish State!

Two hundred and thirty-two new immigrants arrived in Israel on Tuesday morning aboard a Nefesh B’Nefesh aliya charter flight. Among those on board, 59 will be joining the Israel Defense Forces as lone soldiers. The flight departed on Monday from New York’s John F. Kennedy International Airport. 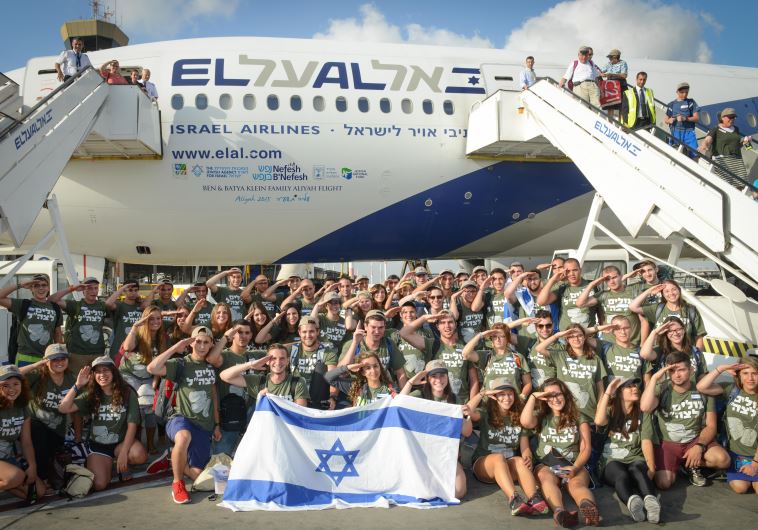 The flight was facilitated in cooperation with Israel’s Ministry of Aliya & Immigrant Absorption, the Jewish Agency for Israel, Keren Kayemeth Le’Israel, JNF-USA, and Tzofim-Garin Tzabar.

This new group of lone soldiers, or young people who leave behind their homes, families and friends to serve in the IDF will join 850 others from the US, and 2,800 lone soldiers from around the world.

Nefesh B’Nefesh, in cooperation with Friends of the IDF (FIDF), cares for thousands of lone soldiers serving in the IDF through the Lone Soldiers Program, which offers guidance, and support, for all lone soldier immigrants during each stage of their service: pre-immigration, pre-recruitment, during active military service, after release from the army, and during adjustment to civilian life.

Additionally, passengers on this special flight included 29 families with their 75 children as well as nine couples and 86 singles.

So, you’re thinking about joining the IDF? Why not?

OR…do you think you’re too old to fight in the IDF, but still want to get into an IDF uniform and help in other ways?

See if you qualify! This may surprise you! Check it out!