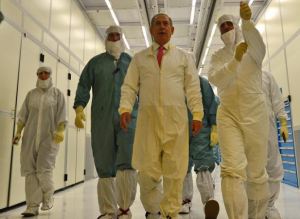 “The national revolution is to eliminate the [notion of a] periphery called Kiryat Gat, Beersheba, Afula and Yokneam,” Netanyahu said during his tour of the facility.

“This is where the vision of the future comes true in the present. You are creating a new future. Technology allows us to create tremendous momentum for Israel, which is a leader of global technology.”

Amir Faintuch, senior vice president and general manager of the Platform Engineering Group at Intel Corporation, noted that “Intel is turning from a company focused only on developing and manufacturing chips, to a company whose developments drive cloud computing centers and billions of smart devices.”

Intel Israel CEO Maxine Fassberg said the company has so far invested $17 billion in Israel, and has plans to purchase Israeli goods and services to the tune of $4.8 billion in the coming decade.

After his tour of the facility, Netanyahu met with Intel workers for the production line’s inauguration. He was gifted with the first silicon product to come off the new line.