Four Israeli policemen injured by Arabs, as a group of Muslims scuffled with Jews attending the  Jerusalem Day march, which saw 30,000 people participating.

Four Israeli policemen were lightly injured on Sunday as clashes broke out between Israeli Jews and Palestinians near Jerusalem’s Old City at the annual celebrations marking Jerusalem Day. Four Palestinians were detained.

Demonstrators were dispersed by baton-wielding police, some on horseback. A police statement said that in one incident “several dozen Muslims scuffled with a group of Jews.”

Police estimated more than 30,000 Israelis marched through old Jerusalem’s mostly Muslim quarter to the Western Wall, the last remnant of the Temple destroyed by the ancient Romans.

Tensions were high in Jerusalem ahead of the holiday held in Israel’s capital to commemorate its reunification in 1967, following Israel’s victory in the Six-Day War. 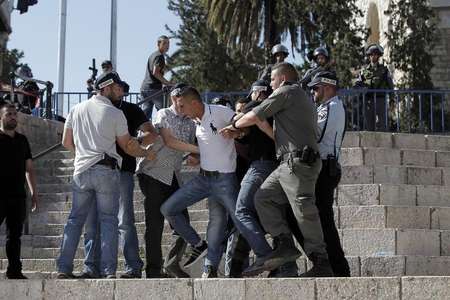 A Palestinian demonstrator is detained by Israeli police during the Israeli “flag march” through Damascus Gate in Jerusalem’s old city during celebrations on May 17, 2015 marking the anniversary of the “reunification” of the city – Photo: Ahmad Gharabli (AFP)

“Jerusalem has always been the capital of the Jewish people alone and not of any other people,” Prime Minister Benjamin Netanyahu said at an official Jerusalem Day ceremony.

“A divided Jerusalem is a past memory: the future belongs to a complete Jerusalem which will not be divided again.”

Jews marking the day were permitted to march through the Muslim Quarter of the Old City as part of the celebrations, after the High Court rejected a petition to change the route of the annual event.

Two Israeli NGOs submitted a petition arguing that the flag-bearing march in previous years had led to calls for violence and provocations.

The petitioners claimed that the parade would lead to unnecessary disruption for local residents and force them to close their businesses and stay at home.

Hundreds of policemen were securing the march, while rabbis and organizers of the march have called for participants to abstain from violence. 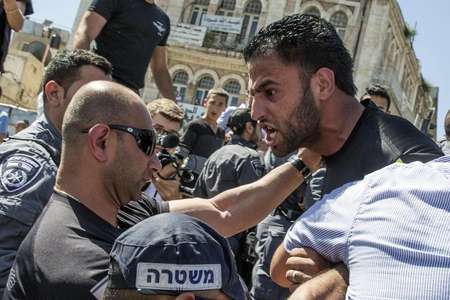 Palestinian demonstrators are confronted by Israeli police during the Israeli’s “flag march” in Jerusalem’s old city during celebrations for Jerusalem Day on May 17, 2015 – Photo: Jack Guez (AFP)

While the court said the march could take place, the justices stressed that they were committed to combating incitement and would take a zero-tolerance policy towards those shouting racist slogans, Israeli news website Ynet reported, siting local media.

A police representative assured the court that law enforcement personnel were prepared to document instances of incitement and make arrests, the news sources said, according to Ynet.

The march in 2014 was marred by nationalistic violence on both sides. Flag-carrying Israelis were filmed fighting with Palestinians at the Damascus Gate in the Old City. On nearby Salah al-Din Street, Palestinians stoned an Egged bus, injuring seven Israelis.

Meanwhile, fires broke out at two synagogues in a Jewish neighborhood in east Jerusalem on Saturday night, Israeli media reported.

According to reports, police suspect that the fires broke out as a result of deliberate arson attacks. No injuries were reported.

Earlier in the day, clashes broke out in east Jerusalem after Israeli security forces chased after Palestinians who attacked Jewish residents with a molotov cocktail. They security forces were assaulted with rocks, which led them to respond with riot dispersal means.

Read More: Jerusalem: not as united as we wanted, but indivisible