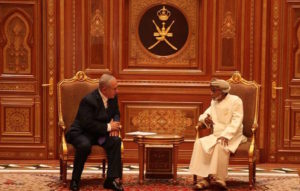 But Prime Minister Benjamin Netanyahu has in recent years demonstrated that the above formula is not the only way forward. Indeed, what many see as the path of “weakness” has largely failed to alter Israel’s standing among its neighbors. For those who know the Middle East, this probably sounds like a no-brainer. The Arab world respects strength, and views pandering with disdain.

Netanyahu credits the projection of strength with leading to incredible steps toward normalization over the past several months, including Culture Minister Miri Regev being welcomed in her official capacity by the United Arab Emirates and Netanyahu himself making a highly-publicized state visit to Oman. On Monday, it was reported that Netanyahu’s visit to Muscat [very top photo – I&S ed] in October had resulted in Oman giving Israel permission to use its airspace for commercial purposes.

The biggest breakthrough has been warming ties with Saudi Arabia. Senior Israeli officials have of late held a number of meetings with counterparts from the oil-rich kingdom, and Netanyahu is reportedly working hard to fully normalize ties with Saudi Arabia before the next general election in Israel, currently scheduled to take place in November 2019.

During last month’s historic visit to Israel by Idriss Déby, president of the Muslim-majority African nation of Chad, Netanyahu said that past prime ministers had tried to cozy up to the Arab and Muslim worlds by making “dangerous concessions.” Netanyahu vowed to continue following a much different path. “We are getting the world’s support, including by many in the Arab world, through our strong and steadfast standing,” he insisted.