Israeli Prime Minister Benjamin Netanyahu, in Jerusalem, said Iran’s prospective deal poses a threat for Israel and vowed to forcefully object to it as long as Iran is left with the ability to arm itself with nuclear weapon. “My job as prime minister is to make sure that Israel’s existence will never be threatened again,” he said.

“The American people pay tribute to the six million Jews and millions of others murdered by the Nazi regime. We also honor those who survived the Shoah, while recognizing the scars and burdens that many have carried ever since. Honoring the victims and survivors begins with our renewed recognition of the value and dignity of each person. It demands from us the courage to protect the persecuted and speak out against bigotry and hatred.

“The recent terrorist attacks in Paris serve as a painful reminder of our obligation to condemn and combat rising anti-Semitism in all its forms, including the denial or trivialization of the Holocaust.”

President Francois Hollande told the French Jewish community that “France is your homeland” and described as “unbearable” the rise in anti-Semitic acts in France, after new figures showed these doubling in 2014.

In Prague, the head of the European Congress warned that Europe is “close to” a new exodus of Jews. “Jihadism is very close to Nazism. One could even say that they are two faces of the same evil,” Moshe Kantor said. 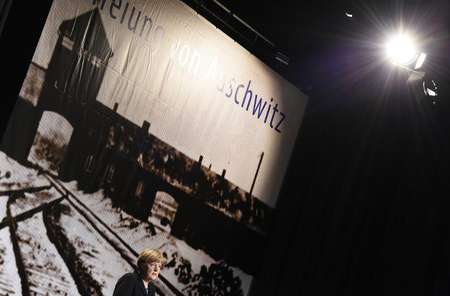 German Chancellor Angela Merkel stands in front of a picture of the Auschwitz concentration camp as she gives a speech during the International Auschwitz Committee ceremony to mark the 70th anniversary of its liberation on January 26, 2015 in Berlin. – Photo: Tobias Schwarz /AFP

In Germany, Chancellor Angela Merkel said it was a “disgrace” that Jews in Germany faced insults, threats or violence.

In New York, Israeli President Reuven Rivlin called on the United Nation to continue battling anti-Semitism across the globe. “Anti-Semitism affects all of humanity and it is my hope that you will continue to lead the UN’s fight against it,” Rivlin told Secretary General Ban Ki-moon.

Turkish Foreign Minister Mevlut Cavusoglu traveled to Auschwitz to participate in an international ceremony, and the speaker of parliament Cemil Cicek attended a Holocaust forum in the Czech capital Prague. A ceremony will also take place in Turkey’s capital Ankara to commemorate Holocaust victims.

Movie mogul Steven Spielberg pointed to what he termed “the growing effort to banish Jews from Europe”, underscored by the deadly Islamist attack on a Jewish Kosher grocery in Paris earlier this month.

Awarded an Oscar for the Holocaust drama “Schindler’s List,” Spielberg — who has also videotaped the testimony of 58,000 survivors — met with hundreds of them, mostly in their 90s, in the southern Polish city of Krakow.

Royals from Belgium and The Netherlands are expected to be in attendance, as are Hollande, German President Joachim Gauck and Ukraine President Petro Poroshenko. 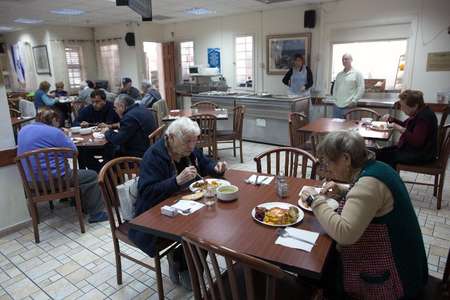 Holocaust survivors eat in the shared dining room of a building in the northern Israeli port city of Haifa, which was launched in 2007 by the Israeli NGO Yad Ezer (Hebrew for “a helping hand”), on January 21, 2015 – Photo: Menahem Kahana/AFP

Also attending is Celina Biniaz, 83, who was among the 1,200 Jews who escaped Auschwitz by being placed on Oskar Schindler’s famous list. As a child she left death camp to work in a nearby factory run by the German industrialist. “I so wish they would settle that problem in the Middle East because I so believe that it has a definite impact on what’s happening with anti-Semitism all over Europe,” Biniaz, who came from California for the ceremonies, told AFP.

‘A bomb would have helped’

For survivor David Wisnia, his return to Auschwitz is bringing on nightmares and flashbacks for the first time. 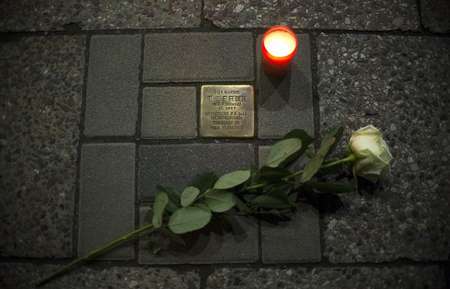 A rose and a candle lie beside a “stolperstein” or stumbling stone, a coaster-sized brass plaque embedded in the pavement in front of the last known address of a Holocaust victim in Berlin – Photo: Johannes Eisele/AFP/File

“Last night sleeping… here, I had a horrible dream and woke up and looked out the window and sort of thought that I was back in Birkenau in cell block 14 where I started in 1942,” he told journalists ahead of Tuesday’s ceremonies.

The grandson of the infamous Auschwitz commander Rudolf Hoess has also come.

“I can’t forgive my father or my grandfather. I’m completely different,” Rainer Hoess, who is devoted to fighting anti-Semitism, told reporters as he visited Auschwitz.

Roza Krzywolwocka-Laurow, 79, was sent to Auschwitz in 1944 as an eight-year-old Polish partisan.

“If I survived it was to warn against this ever happening again,” she told AFP at the bullet-riddled “Wall of Death”, where the Nazis shot thousands.

Of the more than 1.3 million people imprisoned there, some 1.1 million — mainly European Jews — perished, either asphyxiated in the gas chambers or claimed by starvation, exhaustion and disease. 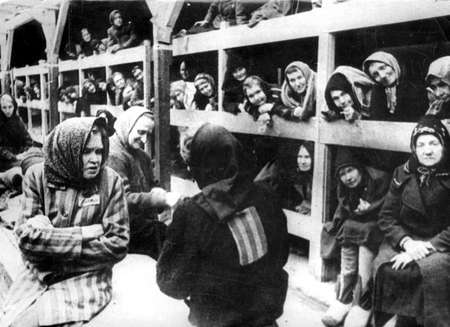 A photo taken in January 1945 shows the inside of a women’s barrack at Auschwitz concentration camp after it was liberated by Soviet troops. – Photo: Yad Vashem Archives/AFP/File

Part of Adolf Hitler’s genocide plan against European Jews, dubbed the “Final Solution,” Auschwitz-Birkenau operated in the occupied southern Polish town of Oswiecim between June 1940 and January 1945. Of the more than 1.3 million people imprisoned there, 1.1 million — mainly European Jews — perished, either in the gas chambers or by starvation or disease.

In all, the Nazis killed six million of pre-war Europe’s 11 million Jews.

Historical records show that by 1942, the Polish resistance was providing Allied powers and Jewish community leaders in the US with the first detailed eyewitness accounts of the Holocaust. But Washington and London failed to act against the six death camps the Nazis set up in occupied Poland.

“The debate as to why the Allies did not bomb the supply lines to Auschwitz remains unresolved,” survivor Marcel Tuchman told AFP in Krakow Monday.

“Whether it was a sinister reason behind it or whether it was just tactical, in that they didn’t want to divert their air force remains unclear,” the 93-year-old said.

“A little bomb in the proper place, it would have really helped.” 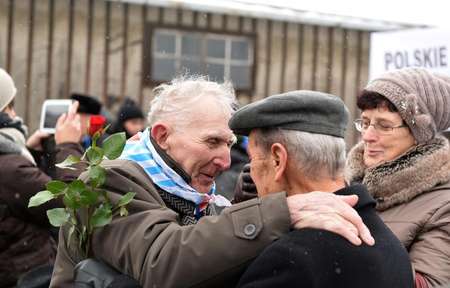 Holocaust survivors greet each other as they arrive to pay tribute to fallen comrades in the former Auschwitz concentration camp in Oswiecim, Poland, on January 27, 2015 – Photo: Janek Skarzynski/AFP

“We were without love and indifferent, when we should have helped, and very many Hungarians chose bad instead of good, the shameful instead of the honorable,” Orban said at a memorial in a Jewish cemetery in Budapest, in his first acknowledgement of his country’s complicity in the Holocaust.

Some 600,000 Hungarian Jews perished, most deported with the aid of local gendarmerie to Auschwitz after Germany occupied Hungary in March 1944.

Approximately half a million people or every third victim in Auschwitz was a Hungarian Jew.