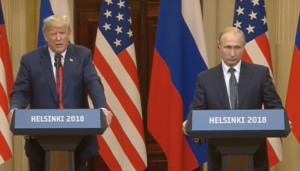 “Prime Minister Benjamin Netanyahu commends the abiding commitment of the US and President Donald Trump to the security of Israel, as expressed at the meeting between President Trump and Russian President Vladimir Putin. The friendship between Israel and the US has never been stronger,” the PMO said.

Trump, Netanyahu, and Putin work out an understanding on Israeli’s security with Syria on the phone. [Illustrative, File]

“Prime Minister Netanyahu also very much appreciates the security coordination between Israel and Russia and the clear position expressed by President Putin regarding the need to uphold the 1974 Separation of Forces Agreement between Israel and Syria.”

According to Putin, Trump “paid particular attention” to Israel’s security needs during their discussions on Syria in Helsinki.

“As far as Syria is concerned the task of establishing peace and reconciliation in this country could be the first showcase example of successful joint work,” Putin said, adding that he and Trump agreed that Israel’s border with Syria should be secured according to the terms of the 1974 UN ceasefire agreement.