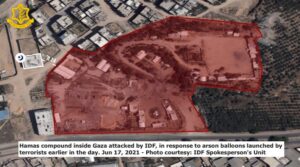 The IDF has increased its readiness for various scenarios & will continue to strike Hamas terror targets in Gaza. pic.twitter.com/awnCMTcSD9

Earlier, the Chief of Staff conducted a situation assessment and ordered increased IDF readiness for a variety of scenarios, including the resumption of hostilities in the face of continued terrorist activities in the Gaza Strip.

At least eight fires caused by incendiary balloons fired from Gaza broke out in southern Israel on Thursday. This is the third day in a row that fires have broken out due to the balloon terrorism.

Over the past day, arson balloons were launched from the Gaza Strip into Israeli territory. In response, overnight, IAF fighter jets struck military compounds belonging to the Hamas terror organization, which were used for terror activities. pic.twitter.com/1HgZwERaKh

The IDF Spokesperson’s Unit said that fighter jets attacked Hamas military compounds that served as camps and meeting places for terrorists in the Khan Yunis and Gaza brigades.

Terrorist activity took place in the compounds that were targeted, according to the statement.

“The Hamas terrorist organization is responsible for what is happening in the Gaza Strip and will bear the consequences of its actions. The IDF is prepared for all scenarios, including the resumption of hostilities, in the face of continued terrorist operations from the Gaza Strip,” the IDF statement said.