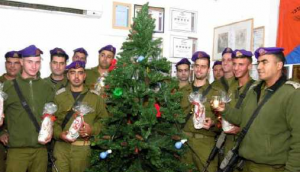 Much of the hostility towards the Christian soldiers comes from Arab members of Israeli Knesset. Knesset member Aida Touma-Suliman of the Joint Arab List attacked the bill during the debate. “They want to drag the Christian Arab population into volunteering for the army that is occupying their people,” she said. “We will try to suggest to our young people a path that is total pride and honor, and not to be part of any machine (IDF) that oppresses our people.”

There are over 130,000 Christian Arab citizens in Israel, a potential source of significant recruitment for the IDF. However, Arab Christian enlistment has been severely limited due largely to the threats and incitement against young Christians wanting to join the army. That appears to be changing as unprecedented numbers of Christians are enlisting.

Father Gabriel Naddaf, a Greek Orthodox priest who has advocated for a strong connection to Israel and IDF service for Christian Arabs, has also been threatened with violence, and even death. His 17-year-old son was attacked in Nazareth. The attacker was identified as an activist from the Arab Hadash party in Israel’s Knesset. Other Arab MKs have also condemned Naddaf, calling him “an agent of Zionism who seeks to divide Arabs.”

Arab Knesset members present during discussions over a bill ultimately designed to end intimidation against fellow Arabs (albeit Christians) were extremely vocal in their opposition. MK Talab Abu Arar from the Joint Arab List told the plenum, “I, as a Bedouin Arab, call on all Bedouin Arab soldiers to throw away their uniforms … and to return to the struggle against racist policies (of the IDF) against Arabs in general and against Bedouin in the Negev in particular.”

It was a bold and dangerous decision by the Israeli government to encourage Arab Christians to enlist in the IDF. Now that the government has passed a bill putting into law protections for the Arab Christians who want to serve in the army, a clear message has been sent to the rabble-rousers stirring up violence between Jews and Arabs in the country;  they will be punished.

Our prayer is that this bold message will contribute to greater integration and cooperation between the many Jews and Arabs who want to live together, and serve together, in Israel.