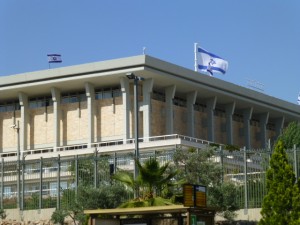 Unrelated to terrorism or the ‘Shabbat wars’, a new study reveals that it’s not just secular residents leaving the Jewish Capital, but also the religious & the ultra-Orthodox that are moving out of Jerusalem by the thousands.

The “Shabbat wars” in Jerusalem (waged by the ultra-Orthodox population against businesses that operate on Shabbat) teach us for the umpteenth time that the status quo between the secular and religious residents of the city has never been more flexible. To be honest, the many and frequent changes in this relationship in recent years raise questions as to whether such a status quo ever even existed.

For years, the relationship between Jerusalem’s secular and religious populations has been shifting under pressures from various interest groups on either side. Despite this, we continue to view the status quo as solid and unchanging, even though it is as malleable as play dough.

We are now bringing to you, for the first time in the Israeli press, a new myth-busting study detailing the precise profile of the Jerusalemites who are leaving the city and the reasons behind their departure. This study is not only illuminating about the people who are leaving, but also about the ones who are staying.

The key conclusion of this study is that the old adage that “only secular Jerusalemites leave Jerusalem” is no longer true. Religious Jerusalemites, including the ultra-Orthodox, are also leaving, and in quite large numbers.

The departing Jerusalemites — some 18,000 people annually (and some 320,000 in total over the last two decades) — are not troubled by whether or not the local movie theater is open for business on Shabbat. The disconcerting terrorist attacks around the capital are also not the culprit.

The real reason for the mass exodus is far more prosaic, and it is not at all exclusive to Jerusalem: a severe shortage in available housing.

In Jerusalem, this shortage is particularly serious. Over the last decade, only 2,000 new housing units have been built every year (according to the Jerusalem Institute for Israel Studies), while annual demand is around 4,000 to 4,500. The Shabbat wars and terrorism may generate headlines, but the key factor driving Jerusalemites out of the city is the lack of housing, which has driven housing prices in the city sky-high.

The new study, compiled by Michal Korach and Dr. Maya Choshen, reveals that 54% of the adults leaving Jerusalem are secular or “traditional but not so religious,” while 45% are religious: 23% ultra-Orthodox, 17% religious and 5% traditional-religious.

Of the people who leave the city, 47% cited the housing crisis as the chief reason for leaving. Another 15% cited “family and friends” and 14% cited job opportunities (mainly the diminished likelihood of finding work in their field in Jerusalem) as the chief reason.

As the second most important factor in their decision to leave, the housing crisis was again the most common response: 30% of families cited housing as the second reason, while 19% cited quality of life, 13% cited job opportunities, and 13% cited family and friends.

The second most cited reason for leaving was trouble finding work — cited by 20% of the secular population, 11% of the religious population and 4% of the ultra-Orthodox population.

Choshen and Korach noted that while the reasons were relatively varied among the secular and religious populations, among the ultra-Orthodox the reason was rather homogenous: housing, with all the other factors dwarfed in comparison.

The study further found that 38% of the departing Jerusalemites have a bachelor’s degree, 18% have a master’s degree and 5% have a doctorate, so more than half have academic degrees. Another 13% were educated at yeshivas and 12% had some form of non-academic higher learning accreditation.

So what can we glean from these findings? First, we now know that if this migration continues, the relative percentage of Jerusalem’s Jewish population is bound to shrink and the percentage of the Arab population, which is currently approaching 40%, will continue to increase.

And another revelation: The percentage of ultra-Orthodox residents among the population of Jerusalem has not grown significantly in several decades. The mass ultra-Orthodox exodus from the city has long-term demographic implications, far more than for the secular population, due to the high birthrate among ultra-Orthodox women.

On the other hand, since the ultra-Orthodox population is generally on the lower end of the earnings scale, the economic “loss” for the city is far more pronounced in the migration of non-ultra-Orthodox sectors.