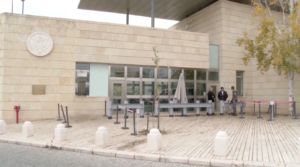 Israel’s Construction Minister is planning for the near future: “There is an apparent pattern of embassies moving to Jerusalem, and we have to start getting ready now.”

Construction Minister Yoav Gallant has instructed the top officials in his ministry to begin the process of planning and approving a new quarter for embassies from countries around the world that will be built in Jerusalem, he revealed on Thursday in an interview from New York, where he will be speaking at Sunday’s Jerusalem Post Conference.

Even before the progress made this week toward moving the embassies of the Czech Republic, Romania, and Honduras, Gallant had already sent a letter to Construction Ministry director-general Hegai Roznik and chief architect Vered Solomon-Maman last Friday, asking them to form a task force that will immediately begin working on finding an appropriate site for many embassies in the capital.

In the letter, which was obtained exclusively by The Jerusalem Post, Galant asked the top figures in his ministry to start working on solutions to house the workers of the embassies.

Following the letter, Roznik, Solomon-Maman and other ministry officials met this week and started working on a plan.

“There is an apparent pattern of embassies moving to Jerusalem, and we have to start getting ready now,” Gallant said. “We might have to build dozens of embassies, and we would need new land ready for that purpose. I asked my ministry to vigorously take action as fast as possible.”

Gallant suggested a couple possible names for the area where the embassies would be located. He initially called it “Embassy Town,” but then said he may decide to instead call it “Trump Town,” after US President Donald Trump, who initiated next month’s move of the US Embassy to Jerusalem.

If that name is indeed given to the embassy quarter, it would not be the first site in the capital named after Trump by a minister in Prime Minister Benjamin Netanyahu’s government. Transportation Minister Israel Katz announced in December that he would name the train station that will be built in the future near the Western Wall after the US president.

Gallant suggested locations in the entrance to Jerusalem near the Jerusalem-Tel Aviv highway, in the city’s southwest corner near Hadassah Medical Center’s Ein Kerem campus, and in Jerusalem’s Talpiot neighborhood. He said he also would not rule out building the quarter in suburbs of Jerusalem, such as Mevaseret Zion and Neveh Ilan.

“These are the first initial thoughts on the issue,” Gallant said. “I want the site to be attractive for countries to move there.”

Gallant has experience with a similar national project involving moving sites from all over the country to a central location. As the head of IDF Southern Command, he played a central role in moving key IDF bases and operations from the Center to the Negev.

Like with that move, security reasons will be key in choosing a site for the embassies, Gallant said. He said a survey would have to be taken of public places and tracts of land, and the Foreign Ministry, Jerusalem Municipality and Shin-Bet (Israel Security Agency) would be heavily involved.

Gallant said special permits would be needed because the sites become controlled by the countries of the embassies and are granted immunity from local laws. Other implications that have to be considered include lines for visas and the guidelines of each country that will be building a new embassy, he said.

“The Americans, for instance, have very strict rules for their buildings, down to the kind of locks on their doors,” Gallant said.

At the request of the Americans, the Jerusalem Municipality Finance Committee authorized NIS 5,793,913 this week for the construction of a second road leading to what will be the temporary US Embassy in Jerusalem’s Arnona neighborhood. A special grant was given by the Transportation Ministry for the emergency project.

“I am thrilled that the US Embassy move has been the catalyst to other countries to finally recognize the reality that Jerusalem is and always will be the capital of Israel,” said City Council member Fleur Hassan-Nahoum, the leader of the Yerushalmim party. “On a practical level, I am proud to have been part of the decision this week in the finance committee of the city to approve the construction needed on a road in Arnona for the embassy to move very soon.”