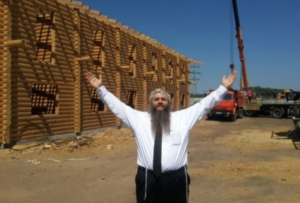 Rabbi Moshe Azman to open Village “Anatevka” for some 100 Jewish refugees from the Ukrainian conflict, but ultimately slated to take in several hundred displaced Ukrainian Jews.

A ceremony marking the official opening of a village designed to provide emergency housing for Jewish refugees from the ongoing conflict in Ukraine is slated to take place on Monday.

The village, dubbed Anatevka after the fictitious village from “Fiddler on the Roof,” is the brainchild of Chief Rabbi of Ukraine Moshe Azman.

“I’m happy that we met the goal we set ourselves to house the first Jewish refugees by the beginning of September. These next few days, work will continue at an expedited pace,” Azman said.

The first houses of the village are being built from wood, which Azman says will provide better insulation in winter than homes made of concrete. Some 100 refugees — mainly from the Donetsk and Luhansk regions of the country — are expected to move there in September, the first of the several hundred residents the project is slated to house.

In addition to the homes themselves, construction is underway on a synagogue, a school and a community center.