President Goodluck Jonathan seeks blessing from God prior to his upcoming elections.
Israel seeks to win his support by blocking Palestinian effort at the UN Security Council.

A year after his last visit, Nigeria’s president is returning to Israel after reaching a historic deal with the militant Islamist movement Boko Haram, in which 219 Christian girls who were abducted 6 months ago are expected to be released. 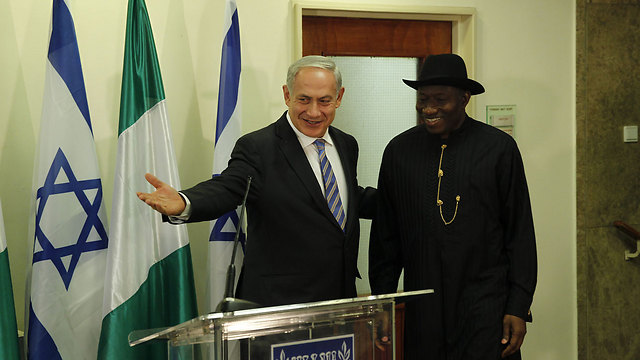 Israel considers the Nigerian president’s visit of great importance, as Nigeria is a current member of the UN Security Council.

Nigeria’s vote could have a decisive effect on a Palestinian effort to pass its proposed resolution that seeks to admit Palestine as a full UN member and set a date for the end of the IDF’s presence in the West Bank.

President Jonathan asked for the visit to be informal, and therefore did not seek meetings with Israel’s President Reuven Rivlin or Prime Minister Benjamin Netanyahu. However, he did intent to make visit to the Kotel so that he may place a note between the stones of the Western Wall.

President Goodluck Jonathan, a devout Christian, will arrive in Israel on Friday on his private plane along with a delegation of 80 people, who will occupy 40 rooms at the Waldorf Astoria Hotel in Jerusalem.

President Jonathan will participate in a mass with 3,000 Nigerian pilgrims at the International Convention Center in Jerusalem next Sunday

Friends of the president said he decided to return to Israel because he believes the Holy Land brings him good luck and wants to receive a blessing from God before the Nigerian presidential elections next year.

During his last visit, President Jonathan signed an aviation agreement with Israel, allowing directs flights to and from Nigeria and Israel. Thirty-thousand Nigerian pilgrims arrive in Israel annually, and their number is gradually increasing.

Relations between Nigeria and Israel have strengthened in recent years, with the two countries cooperating in the war on terror as well as agriculture, construction, communication and intelligence initiatives.

More than 50 Israeli companies operate in Nigeria in the fields of civil engineering, energy, telecommunications, security and more.