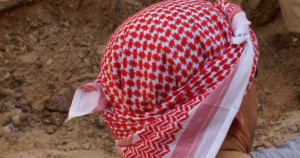 A distinguished Saudi cultural researcher & scholar of Jewish texts accepted an invitation by the Israeli Foreign Ministry to visit Haifa, Tel Aviv and Jerusalem. Remarking on how local Israeli Jews welcomed him warmly when learning who he was, the Saudi guest proclaimed, “I love the Jewish people and all citizens of Israel!”

Relations between Israel and Saudi Arabia have improved significantly in recent years. Earlier this year, the visit of a Saudi Arabian blogger made big headlines, especially after local Arabs attacked him on the Temple Mount for normalizing relations with the Jewish state.

Blogger Mohammed Saud, attacked by Arabs while on the Temple Mount.

But that didn’t deter blogger Mohammed Saud, who in interviews with Israeli media gushed his love for the Jewish state and people.

Again this past month, Israel hosted a prominent Saudi guest, who similarly faced harsh criticism for violating the decades-long boycott of the Jewish state. The guest, who’s name is being protected, is a cultural researcher and scholar of Jewish texts, and was invited by the Israel Foreign Ministry.

With complete anonymity, he gave an interview to Israel’s Army Radio, and reiterated what Saud said earlier this year, namely that the Arab world can no longer resist normalization with Israel.

More than that, he wants to see Israel and Saudi Arabia enter into a “real peace agreement,” not a cold peace like what exists between Israel and its neighbors in Egypt and Jordan.

Now, many Arabs will say that normalization and peace is only possible after Israel acquiesces to Arab demands regarding a Palestinian state. But when asked about the Israel-Palestinian conflict, this Saudi had a different take:

“Why should the Arab world be in conflict with Israel and Western superpowers over the troubles of a small minority? This minority had the opportunity to found a state in 1947, but refused because it was concerned only with the question: ‘Why do the Jews have an independent country?’”

He also dispelled the popular notion that Israel is a racist anti-Arab society by recounting his visits to Jerusalem, Haifa and Tel Aviv, where local Israeli Jews welcomed him warmly.

“When people heard that I was from Saudi Arabia, they were astonished,” he said, adding, “Not hostile, but accepting of who I am.”

Speaking in broken Hebrew, the Saudi guest concluded by stating, “I love the Jewish people and all citizens of Israel.”