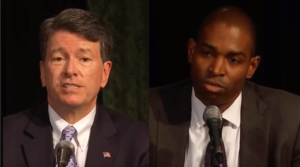 Delgado, who said his wife and children are Jewish, was asked at the debate whether he agreed with President Donald Trump’s decision to relocate the US Embassy in Israel from Tel Aviv to Jerusalem.

He replied by saying that he does not agree with the move and explained his position, saying, “The capital of Israel ought to be in Jerusalem and I think that to get there we should do it on a multinational basis. I think that unilaterally moving in that direction sends the wrong signal.”

Delgado then claimed that “being pro-Israel and being pro-peace is critical, but I’m also pro-democracy, and as currently constructed, Israel is not a Jewish democracy. Those settlements make it so that it can’t be.”

Faso pointed out that Israel is “our main democratic ally in that region and in fact, moving the embassy to Jerusalem was the right decision.”

He admitted to having some difference with Trump but stressed the president’s decision to move the embassy was the right one because “that is the capital of Israel. They are our main ally in the Middle East.”

Faso warned that taking the position that Israel is not a democracy as Delgado did is dangerous.

“He supports the Iran deal. Millions of dollars went to the Iranian regime and they are the main fomenter of dispute and discord and war in that region. They are a threat to the State of Israel. I’m astonished he does not believe Israel is a democracy,” continued Faso.

Delgado then fired back by clarifying that he said Israel is not a “Jewish democracy” and explained, “Given the fact that we have settlements currently in the region, it cannot be deemed a nation of Jewish democracy and until we deal with the settlements we’re going to have that issue.”

Faso pointed out that Israeli Arabs and other minorities are represented in the Israeli Knesset and said, “Israel is a Jewish state, and to follow the approach that Mr. Delgado wants it would no longer be a Jewish state. It’s a really outrageous misinformation that the gentleman holds, but it shows how dangerous his views are on foreign policy.”

Prior to being a congressional candidate, Delgado was a rapper and six-figure lawyer at Akin Gump, a top-50 law firm that was the largest lobbying firm by revenue in the United States in 2017.

US President Donald Trump announced last December that the US recognized Jerusalem as Israel’s capital and would be relocating its embassy from Tel Aviv to Jerusalem. The embassy officially relocated on May 14, the day on which the State of Israel was established in 1948.

The Palestinian Authority (PA), angered by Trump’s move, broke off contact with the US after the announcement and to this day refuses to consider the Trump administration an honest broker for peace negotiations with Israel.

“Characterizing Israel as anything other than a democracy belies the truth and is incongruous with reality. Israel’s standing as the United States’ sole democratic ally in the Middle East is well-known, and Mr. Delgado’s comments raise a red flag about his position vis-a-vis Israel,” he added.

“We are also concerned about Mr. Delgado’s remarks regarding ‘settlements’ in Israel,” concluded Weiss. “The notion that Jews should be precluded from residing in certain parts of their homeland and in areas that were settled by the forefathers of the Jewish people and then regained by the State of Israel in a defensive war against Jordan in 1967 is farcical. Jews should have the absolute right to build homes and raise their families in every corner of the State of Israel.”