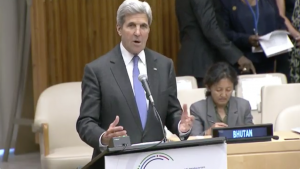 “We’re not going to comment on leaked tapes,” says @PressSec when asked about audio from the New York Times of John Kerry telling the Iranian Foreign Minister about Israeli covert military actions in Syria. pic.twitter.com/EKSBTodjYT

Kerry, now President Biden’s special climate envoy, served as President Barack Obama’s Secretary of State from 2013 to 2017, where he was instrumental in brokering the Iran nuclear deal. The deal was heavily opposed by Israel, with whom Kerry has frequently sparred.

Conservative critics questioned why the Kerry item wasn’t given more attention by the Times, given Iran is an enemy of the United States and Israel is a strong ally. The IRGC’s influence over Iran’s government is already well-known.

“While no one would be surprised to hear that Israel carries out covert operations against Iran, why in the world would an American Secretary of State pass that information to a regime that leads ‘Death to America’ protests in its streets? Isn’t this the real news in the US, especially with Kerry now joining another administration as its ‘climate change envoy’?” HotAir’s Ed Morrissey wrote.

“At best, this shows that Kerry is enormously and irresponsibly indiscreet; at worst, he’s exposing American intelligence to an enemy in order to attack an ally. And frankly, it looks a lot more like the latter than the former, and a lot more like an actual crime by a high-ranking US government official.”

National Review’s Jim Geraghty noted the Kerry revelation was “buried fairly deep” in the story. The piece also delved into Zarif’s rivalry with IRGC leader Qassem Soleimani, who was killed by a U.S. airstrike in Iraq in 2020.

President Donald Trump withdrew the United States from the Iran nuclear deal in 2018, infuriating Kerry and other Obama officials (who are currently part of the Biden administration). Kerry revealed at the time he had engaged in behind-the-scenes diplomacy with Zarif to try to salvage the agreement.