Obama called out for “appalling and unprecedented” shunning of Israel 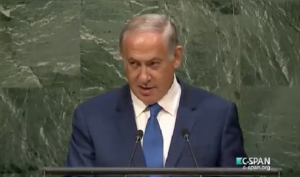 However, two announcements by the Zionist Organization of America have returned the speech – during which he glared at the General Assembly delegates from around the world for 45 seconds of dramatic silence – to the news.

First, the ZOA issued a statement of praise for Netanyahu’s condemnation of the international community for its utter silence regarding continuing Iranian threats to destroy Israel. Netanyahu also noted that Iran has also increased its funding and arming of the Assad regime in Syria, Hamas in Gaza, Hezbollah in Lebanon.

Breitbart News reported that it was told by a State Department official that “Ambassador Power and Secretary Kerry were unable to attend Israeli Prime Minister Netanyahu’s speech before the General Assembly because they were called into a meeting with President Obama, [in] which they participated via video teleconference.”

“It is appalling and unprecedented,” ZOA National President Morton A. Klein said, “for an American president to pull senior U.S. representatives from the UN General Assembly hall ahead of the leader of any American ally’s address to the United Nations. President Obama cannot possibly have been unaware of the signal this sends to friend and foe alike regarding the US/Israeli relationship which… he has professed to value and uphold.”

Klein surmised that the reason Obama would do this was to “tell Iran, Arab nations, and the rest of the world that he means to maintain a frosty and fraught relationship with Israel, despite talk of moving forward with cooperative efforts with Israel to combat the many manifest and emergent dangers in the Middle East — many of them stimulated by the terrible and utterly defective nuclear deal with Iran upon which he insisted.”

“President Obama… seems to be signaling Tehran that ‘You have nothing to fear from joint U.S./Israeli efforts. I am putting more daylight between Washington and Jerusalem. The United States will give Israel arms, but it will not stop you building up your terror proxies against her.'”