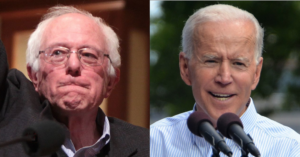 Speaking at J Street’s annual conference in Washington, he added that “some of that $3.8 billion should go right now into humanitarian aid in Gaza.”

Just when you thought Bernie Sanders couldn’t get any more radical, he outdid himself. He wants to take money we give to Israel to defend itself from terrorists, and give it to Gaza, which is run by terrorists?? Unreal. Why isn’t every other Dem pres candidate saying he’s wrong?

Mayor of South Bend, Indiana, and presidential hopeful, Pete Buttigieg, addressed the issue as well, saying that the US has mechanisms to ensure that US taxpayer support to Israel “does not get turned into US taxpayer support for a move like annexation.”

When asked if he would also try to put pressure on Israel to change its settlements through cutting US military assistance Biden told the Wall Street Journal that he won’t be the person to do such a thing. “Not me,” was his reply.

“I have been on record from very early on opposed to the settlements, and I think it’s a mistake, he clarified. “And [Prime Minister] Netanyahu knows my position. But the idea that we would draw military assistance from Israel, on the condition that they change a specific policy, I find to be absolutely outrageous.”

“Anyway, no, I would not condition it, and I think it’s a gigantic mistake. And I hope some of my candidates who are running with me for the nomination; I hope they misspoke, or they were taken out of context.”