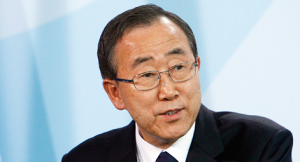 By Shlomo Cesana and Erez Linn

“Over the last decade I have argued that we cannot have a bias against Israel at the U.N.,” Ban told the U.N. Security Council. “Decades of political maneuvering have created a disproportionate number of resolutions, reports and committees against Israel. In many cases, instead of helping the Palestinian issue, this reality has foiled the ability of the U.N. to fulfill its role effectively.”

The Israeli-Palestinian conflict “is not the reason for wars in the Middle East, but its resolution can create momentum in the region,” he said.

Ban stressed that nevertheless, “Israel needs to understand the reality that a democratic state, which is run by the rule of the law, which continues to militarily occupy the Palestinian people, will still generate criticism and calls to hold her accountable.”

He further lambasted Hamas for its “anti-Semitic charter, which seeks to destroy Israel,” and called on the Gaza Strip’s rulers to “condemn violence once and for all and recognize Israel’s right to exist.”

This was Ban’s final Security Council briefing on the Middle East, as his term is scheduled to end on Dec. 31. He will be succeeded by Portuguese diplomat Antonio Guterres.

“The secretary-general has admitted the clear truth: The U.N.’s hypocrisy toward Israel over the past decade has broken records. The past 10 years have seen the U.N. pass 223 resolutions condemning Israel, and only eight resolutions condemning Syria, whose regime is butchering its people. This is utterly absurd.”

Danon expressed hope that Guterres’ term in office “will bring with it a new era in Israel-U.N. relations.”