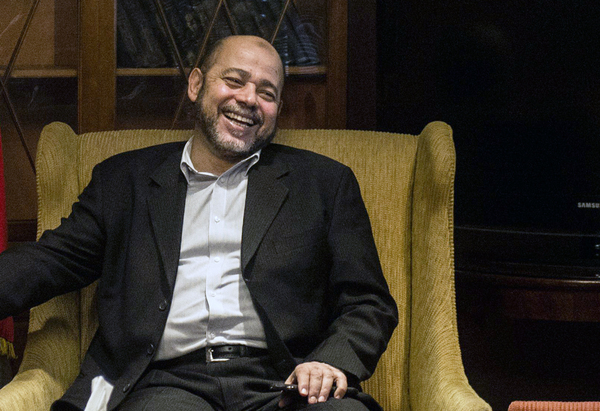 The activists were escorted out of Ramallah in police vans after Palestinian protesters attacked the hotel where a “peace conference” between Israelis and Palestinians was taking place.

The event in Ramallah was organized by Minds of Peace, a not-for-profit organization whose mission is “Grassroots Peace Making and Public Diplomacy: A novel approach to the peaceful resolution of the Palestinian-Israeli conflict.”

Although the event in Ramallah was supposed to last for two days, during which Israelis and Palestinians would talk about peace and coexistence, as soon as the conference began at City Inn Hotel in Ramallah, scores of Palestinian activists arrived at the scene, chanting slogans against the presence of Israelis in Ramallah.

“Israelis out, out! Palestine is Arab, from the sea to the river,” shouted one a female protester. “This land is not for sale!” shouted another protester, as he tried to force his way into the conference hall.

Palestinian policemen who were rushed to the scene were unable to stop the protesters from damaging windows and doors as they hurled stones at the hotel.

The protesters also hung a large poster at the entrance to the hotel declaring, “Normalization [with Israel] is an act of treason.”

The protest finally forced the organizers of the conference to call it off, with the Israelis quickly leaving Ramallah out of concern for their safety.

“The situation outside is very tense and we have to stop here,” Ibrahim Enbawai, one of the Palestinian participants in the conference declared after a brief chat with the police commander. “There are hundreds of people outside and the police have asked that we stop the event.”

Amal Obaidi, one of the protesters, said she was opposed to the “peace” conference because it represented a policy of “surrender and normalization with Israeli occupation.” She further explained, “We reject any normalization meeting. Jerusalem is an Arab city and it will remain so.”

This was not the first time that Palestinians expressed their opposition to meetings between Israelis and Palestinians. “Anti-normalization” activists have succeeded in foiling many other meetings, especially those that are held in cities and towns under the control of the PA.

That is why the Israeli and Palestinian “peace activists” have been forced to hold their meetings in secret locations or in different countries around the world.

There are a number of disturbing elements in the story of the “anti-normalization” advocates.

First, the protesters are acting against Israelis who openly support the Palestinian issue and are completely opposed to the policies of the current Israeli government. In other words, the Palestinians are “spitting in the face” of those Israelis who support their demands and are prepared to put their lives at risk by entering Ramallah to talk peace.

Second, most of the activists who are protesting against such meetings are affiliated, in way or another, with the same Palestinian Authority, which is conducting official peace talks with Israel under the auspices of U.S. Secretary of State John Kerry. So why don’t the “anti-normalization” folks also turn out against the Palestinian leadership in Ramallah? Most probably because they are scared of being arrested or harassed by Palestinian security forces. Moreover, many of the activists are on the payroll of the PA and are afraid of losing their salaries.

Fourth, not a single Palestinian official has dared to condemn the assaults on the Israeli and Palestinian peace activists. Even the PA leadership, whose representatives often say (in English) that they are in favor of such meetings, has yet to denounce the actions and threats of the “anti-normalization” activists.

If fifteen Israelis and an equal number of Palestinians are unable even to talk about peace, what would happen if and when PA President Mahmoud Abbas signs a peace agreement with Israel? Might he, too, find himself being escorted out of Ramallah under police protection for daring to talk peace with Israel?

Khaled Abu Toameh is an Arab Muslim, a veteran award-winning journalist who has been covering Palestinian affairs for nearly three decades. He studied at Hebrew University and began his career as a reporter by working for a PLO-affiliated newspaper in Jerusalem.
Abu Toameh currently works for the international media, serving as the ‘eyes and ears’ of foreign journalists in the West Bank and Gaza Strip.
Abu Toameh’s articles have appeared in numerous newspapers around the world, including The Wall Street Journal, US News & World Report and The Sunday Times of London.
Since 2002 he has been writing on Palestinian affairs for The Jerusalem Post. Abu Toameh has also been working as a producer and consultant for NBC News since 1989.