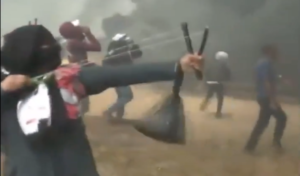 In what the IDF has referred to as a violent “riot,” approximately 5,000 Palestinians participated in what Hamas planned as the final ‘March of Return’ protest on Israel’s border, that left at least 170 Gazans injured and 1 dead.

Israeli troops killed a Palestinian and wounded at least 170 protesters in the Gaza Strip Friday, Palestinian medical workers said, bringing to 44 the number killed during a six-week protest at the Gaza-Israel border.

Approximately 5,000 Palestinians have participated in what the IDF has called a violent “riot,” burning tires, hurling rocks at the security fence and at Israeli soldiers, and launching flaming kites into Israeli territory.

“IDF troops are responding with riot dispersal means and are firing in accordance with the rules of engagement,” the IDF said in a statement. “The IDF will not allow any harm to the security infrastructure or security fence and will continue standing by its mission to defend and ensure the security of the citizens of Israel and Israeli sovereignty, as necessary.”

The “kite bombs,” as they have been dubbed, consist of a flaming rag that is attached to a kite with the capability of getting across the fence and igniting dry farm fields. In recent weeks, Gazans have also attached Molotov cocktails to kites.

Friday marks the last week of the protest.

Organizers of the protest, dubbed the “Great March of Return,” said they expected tens of thousands of Gazans at border encampments in the coming days.

A report by the aid charity Save the Children, published on Friday, said that at least 250 Gazan children had been hit with live bullets during the protests, among nearly 700 children injured overall. The analysis was based on data collected by the Palestinian Ministry of Health in Gaza.

Israel has been criticized by human rights groups for its lethal response to the protest.