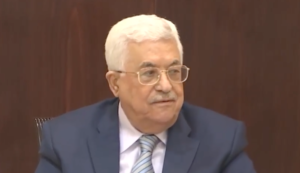 Abbas was elected in 2005, but has overstayed his five-year term over the rift with Hamas, which seized control of the Gaza Strip in a military coup in 2007, effectively splitting the Palestinian Authority into two separate entities. Several reconciliation attempts between the rival factions, most recently in 2014, have failed, preventing new presidential elections. To date, no one has been able to successfully challenge Abbas for the role.

A lawyer representing Issa Amro, a human rights activist from the West Bank city of Hebron, said that his client was arrested Monday after posting his comments on Facebook.

Ayman Qawasmi, a Palestinian reporter, was arrested on Sunday after writing that Abbas should resign for “failing to protect the Palestinian people.” Qawasmi’s radio station was closed last week by the Israeli military for alleged incitement to violence.

The arrests are the latest in recent crackdowns on journalists by the Palestinian Authority.