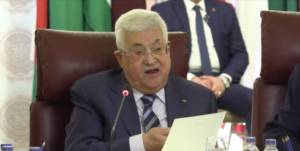 Abbas’ rambling diatribe before the Arab League last week confirmed what most Arab leaders already knew – the 84-year-old autocrat can’t be in office for much longer – and those seeking to replace him are skirmishing for position.

The relative indifference in the West Bank to the Palestinian factions calls for “days of rage” following the release of the Trump administration’s deal of the century stems from both the Palestinian people and top Ramallah officials understanding that any violent provocation will only undercut their interests, senior Palestinian sources told Israel Hayom on Monday.

The relatively calm routine in the West Bank allows European donors to continue funneling hundreds of millions of dollars into the Palestinian territories, thus allowing the Palestinians there to maintain normalcy despite any tensions with Israel.

Moreover, major Arab countries, such as Egypt, Saudi Arabia and the Persian Gulf emirates, have a clear interest in helping maintain this calm, as does Jordan, which fears any violence will spill over into its territory.

Senior Palestinian officials, especially those who see themselves as potential successors to Palestinian Authority President Mahmoud Abbas, are therefore wary of echoing his call to sever security ties with Israel, as “they know any violence on the ground will eventually affect them, as well,” a top Ramallah official said.

Abbas’ confused and jumbled address before the Arab League last week seemed to underscore what everyone in the Palestinian Authority already knows – the 84-year-old leader won’t be in office for much longer.

But Abbas has deliberately refrained from naming a successor, and concerns are growing that following his departure, regardless of the circumstances, chaos will follow.

“Abu Mazen [Abbas] has made sure to remove anyone who could challenge him,” the source explained, naming exiled Palestinian politician Mohammed Dahlan and jailed Fatah strongman Marwan Barghouti as examples.

Barghouti, is serving five life sentences plus an additional 40 years in an Israeli prison for his involvement in lethal terrorist attacks during the Second Intifada.

Top Ramallah officials, as well as Israeli defense officials, believe that Head of the Palestinian Authority intelligence agency Maj. Gen. Majid Faraj is the one most likely to succeed Abbas.

Faraj, 57, keeps a low media profile. He was named head of the Palestinian General Intelligence Service in 2009. In the late 1980s, he served six years in Israel prison for security offenses carried out during the First Intifada.

Still, over the year, he has fostered an excellent relationship with the Israeli defense establishment and the CIA, a senior Israeli defense official said, including former Coordinator of Government Activities in the Territories Maj. Gen. Yoav Mordechai.

Still, there are those in the PA who do not like Faraj’s close ties with his Israeli and American counterparts, and Hamas – the terrorist group ruling the Gaza Strip – has even accused him of being a “collaborator.”

Fatah Central Committee member Tawfiq Tirawi is also a strong contender to replace Abbas, but the 71-year-old lawmaker has something of an image problem.

During the Second Intifada in the early 2000s, Tirawi – then the PA’s intelligence chief – was charged with financing and planning terrorist attacks. Moreover, after years of challenging Abbas in Fatah institutions, a Palestinian official close to both said that “Abbas doesn’t believe a word Tirawi says.”

And then there is Dahlan who, despite living in the United Arab Emirates since he was driven out of the Palestinian territories in 2011 over corruption, still enjoys widespread support among the Palestinian public.

Dahlan is also known to have good ties with Egyptian President Abdel Fattah el-Sissi, but according to another Palestinian official, “The day Dahlan sets foot in the West Bank or Gaza, he will be arrested and tried for corruption and subversion. No one will forgive him.”