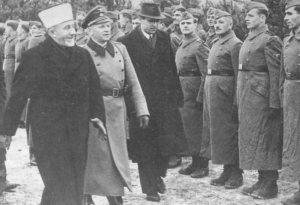 In his speech, he called on the international community to get involved in order to “defend” the Arab residents of Jerusalem who are dealing with “illegal” activities from Israel “that oppose international law and human rights.”
RELATED:
Hamdallah’s call to take action against Israel urged international pressure so as to end the “occupation” and establish an independent Palestinian state along the 1949 Armistice lines, with Jerusalem as its “eternal capital.”

He accused Israel of trying to wipe out the “Arab national identity” of Jerusalem, which is in fact the ancient 3,000-year-old capital of the Jewish people. As part of his accusations, he alleged that Israel is rewriting history and expelling Arabs from the capital.

The PA Prime Minister went on to say the Conference is inculcating the path of former Mufti of Jerusalem Haj Amin al-Husseini, who infamously sealed a pact with the genocidal Nazi regime to wipe out all Jews.

Hamdallah termed al-Husseini, who was a close confidante of Adolf Hitler, as “the pure-hearted son” of the “Palestinian nation.”

“This Conference is a continuation of the First Islamic Bayt al-Maqdis Conference held by the deceased Mufti Haj Amin al-Husseini on Palestinian soil in 1931, and here today we walk in his path according to the instructions of the (PA) President Mahmoud Abbas,” said Ida’is.

In an ironic twist given Hamdallah’s claims of rewriting history in Jerusalem, Bayt al-Maqdis is in fact the Arabicized version of the Hebrew “Beit Hamikdash,” which is the term for the Holy Temples that stood in Jerusalem.