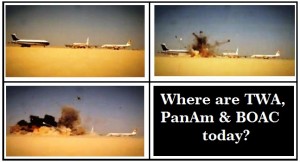 However, an attorney for Mohammed Rashed called the claim “another in a long line of delay tactics” by the government and argued for Rashed’s immediate release from immigration custody, where he has been held finishing a prison sentence in early 2013.

Both sides want Rashed removed from the United States, the lawyers told U.S. District Judge Richard Arcara, who did not immediately rule on whether Rashed should remain locked up in the meantime. Rashed is being held at a federal detention facility outside Buffalo.

“The government is really prioritizing this case and has a concrete plan in place,” he said.

He said a State Department working group would focus for the next 30 days on long-running efforts to have Rashed sent to his stated destination of choice, the West Bank. If that falls through, officials would move to a Plan B with hopes of identifying five other options by the end of June, he said.

Rashed pleaded guilty in 2002 to setting off a bomb on Hawaii-bound Pan Am Flight 830, killing a Japanese teenager and injuring 15 other people. As part of the plea agreement, the government said it would work to deport Rashed to the country of his choice after he finished serving his sentence on murder and conspiracy charges.

But efforts to deport Rashed have stalled amid diplomatic complications. Dempsey said a State Department official plans to raise the case during an upcoming visit to Israel, which controls access into and out of the West Bank.

Rashed’s attorney Robert Tucker called the prolonged post-prison detention unconstitutional and said a Washington, D.C., halfway house where Rashed has support would be “the perfect place for him.”

Rashed was not in court for the hearing.

Tucker asked the judge to require government updates on removal efforts every one or two months to ensure things move forward. He said freeing Rashed in the meantime would speed the process.

Dempsey said the directors of the FBI and the Homeland Security Department have weighed in and “there’s just no way the government is comfortable with Mr. Rashed being out on the streets under any conditions.”

Rashed was a top lieutenant to Abu Ibrahim, a Palestinian bombmaker who formed 15 May, a terrorist faction that took responsibility for several attacks in the 1980s. In 1982, Rashed, on a flight to Japan, tucked a bomb beneath a seat cushion, pulled the pin, engaged a timer and then disembarked when his flight landed in Tokyo. The device exploded as the plane continued on to Honolulu, killing the 16-year-old boy who sat in Rashed’s seat on the flight’s next leg.

Rashed was arrested in Greece in 1988 and was prosecuted there. He was released in 1996 but was arrested in 1998 by U.S. authorities in another country and was sent to Washington for prosecution.

Besides the Pan Am bombing, Rashed has admitted involvement in four other bombings or attempted bombings, Dempsey said.