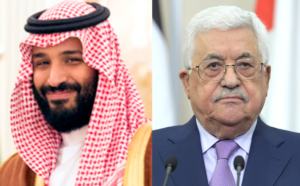 Today, it is common to hear that Jerusalem is Islam’s third holiest city, being the location of the “Al Aqsa Mosque” referred to the in the Koran.

The Al-Aqsa Mosque [in Jerusalem] did not exist back then, and the city was not called Al-Quds. It was called Aelia, and it had no mosques.

He is far from being alone in that position.

In fact, a growing number of Saudis on social media have taken to using a hashtag that translates as “Riyadh is More Important Than Jerusalem.”

It is a deliberate downplaying of the importance of Jerusalem from both religious and nationalist viewpoints, and it coincides with the oil-rich kingdom’s warming relations with Israel.

Saudis have grown increasingly frustrated with what they see as the Palestinian intransigent and treachery.

Palestinian rejection of Saudi efforts to bring the Israeli-Arab conflict to an equitable end has incensed many in Riyadh, as has Palestinian support for Iran’s nuclear program and collaboration between Palestinian groups and Iran’s Lebanese proxy, Hezbollah.

Like Israel, Saudi Arabia views Iran as an existential threat.

Alienating Saudi Arabia in this manner threatens to lose the Palestinians the support of the Arab world’s top powers.

And yet, we see their hearts continue to harden.

In a backlash to the aforementioned Saudi hashtag, Palestinians on social media have started using a hashtag that translates as “Jerusalem is more important than the [Saudi] king.”

If things continue down this path, a day could come when the Arab world’s leading powers reject a Palestinian state even more than Israel does.

This below Facebook post explains how, even among the world’s Arabs, the Palestinians are globally seen as violent, parasitic, untrustworthy, thieves and unable/unwilling to accept any responsibility what so ever… on anything.