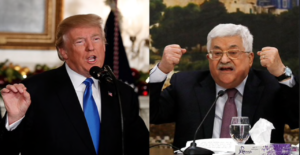 The ministry said, according to the Xinhua news agency, that it considered the step “an emphasis by the administration of President Donald Trump to antagonize the Palestinian people and undermine any chance for peace on the basis of a two-state solution.”

Up until now, “Place of Birth” in US passport designates city… ‘Jerusalem’, but doesn’t list what country. – Photo: Not Attributed.

The statement follows a comment by US Secretary of State Mike Pompeo, who said on Tuesday that the Trump administration is considering the move to allow US citizens born in Jerusalem to list “Jerusalem, Israel” on their passports.

While the Trump administration recognized Jerusalem as the capital of Israel and moved the US embassy from Tel Aviv to Jerusalem, State Department policy still does not allow for the indication of Jerusalem as being a part of Israel on passports of US citizens.

The PA, which views Jerusalem as the capital of a future Palestinian state, has been at oddswith the Trump administration and has boycotted it ever since it recognized Jerusalem as Israel’s capital in late 2017 and relocated the US embassy to the city.

A recent report in Israel indicated that PA officials are re-thinking their boycott of the US administration.

PA chairman Mahmoud Abbas later made clear that relations with the current US administration will not resume unless Trump “recognizes the source of authority for the peace process and UN resolutions and accepts the two-state solution.”

It drives me crazy having to post “Palestinian people” in an article.

I need to be clear: Saying that is like saying “American people” where they are a wide collection of people from a wide range of countries. They are not a ‘people’ per se, of one religion, or originally from a common place.