Palestinians will be denied entry into Israel if debts remain unpaid 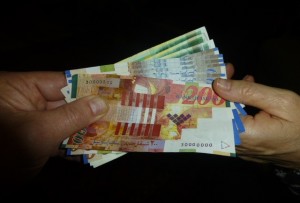 Under the new ministerial proposed procedure, Palestinians will be denied entry into Israel if they fail to settle debt to Israelis.
• New approach rectifies Palestinian officials who remained uninterested in enforcing laws.
• Minister: Total size of debt owed to Israelis is $870 million.

Justice Minister Ayelet Shaked and Defense Minister Avigdor Lieberman will unveil Sunday a new measure to crack down on Palestinians who owe money to Israelis.

Under the proposed mechanism, Palestinians will be denied entry into Israel if they had not settled their debt. If they already have a permit for entering Israel, they will be issued a 30-day warning upon entering Israel.

Under the existing statute from 1998, Israelis who wish to impose such a sanction on Palestinian debtors must jump through many hoops at the Justice Ministry. The process requires a lengthy approval process and depends to a large extent on cooperation of Palestinian Authority officials.

Under the existing mechanism, Israelis first have to turn to the ministry’s Enforcement and Collection Authority and provide proof that the person in question had missed the deadline to pay the debt and has been duly warned. Only after those conditions have been met, the ministry takes things to the next level through the military channels in Judea and Samaria. This triggers a 30-day period, after which a formal entry ban is issued against the Palestinian

“The scope of debt that Palestinians own Israelis is just unacceptable,” Shaked said on Wednesday. “Its increase has forced us to amend the current statute so that it is more effective and to ensure that the debt is collected in an optimal fashion; we are done with our forgiving approach to Palestinians and I hope that the discrimination against Israelis and Israeli agencies ends.”

Officials estimate that the amount owed by Palestinians to Israelis stands at more than 2.5 billion shekels ($870 million).