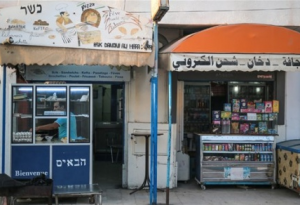 Having seen little persecution, the Jewish community on the Tunisian island of Djerba traces its roots back to the Babylonian exile of 586 B.C.E., and is one of the few communities not exiled due to the creation of Israel.

When school lets out, the streets around the ancient synagogue on the Tunisian island of Djerba fill with rambunctious boys wearing kippot and girls in long skirts, shouting to each other in Hebrew, Arabic and French.

The Jewish community in the resort island traces its roots all the way back to Babylonian exile of 586 B.C.E., and is one of the few communities of its kind to have survived the turmoil around the creation of Israel, when more than 800,000 Jews across the Arab world either emigrated or were driven from their homes.

Here the faithful pray at the La Ghriba synagogue — widely believed to be Africa’s oldest synagogue — beneath intricate tile walls bearing blue and yellow geometric shapes that would not seem out of place at a mosque. The synagogue’s name can be translated as “strange” or “miraculous.”

Boys walk past closed shops at the beginning of Shabbath at Hara Kbira, the main Jewish neighborhood on Djerba – Photo: AP

The surrounding streets include a kosher butcher, a bakery that sells a traditional tuna-filled pastry known as “brik,” and schools that teach in Hebrew, French and Arabic. During the annual Lag Ba’omer festival, the streets throng with Jewish pilgrims who venerate Rabbi Shimon bar Yochai, a second-century mystic.

“We’re almost 1,500 now across the country, maybe fewer than residents of a building in New York,” says Jacob LaLoush, 55, the owner of Mamie Lily, a popular kosher restaurant in the capital, Tunis. “But we have a perfect Jewish life: schools, synagogues, and kosher shops. Even if they are not many.”

A man prepares meals for his family on the eve of Shabbath at Hara Kbira, the main Jewish neighborhood on Djerba – Photo: AP

Tunisia’s Jewish population has dwindled from 100,000 in 1956, when the country won independence from France, to less than 1,500, mainly as a result of emigration to France and Israel. But unlike in much of the rest of the Arab world, Tunisian Jews have seen little direct persecution and have only rarely been targeted by extremists.

LaLoush says their situation is “completely different from other Arab countries, where there were laws and policies that forced the Jewish communities out.” But he says there have been times when they were “not pushed out of Tunis, but were shown the doors.”

A suicide truck bombing carried out by al-Qaida outside the Djerba synagogue in 2002 killed 19 people, mainly German tourists. To this day the neighborhood and the synagogue are heavily guarded by police.

“We have coexisted with our Muslim friends for a long time. We share food, music and tradition,” said Ariel Houri, who works in his father’s furniture shop in Djerba. As to the occasional friction, “it’s mostly the hot-headed youth; they get affected by the news. But the older ones are still sitting in cafes, sharing drinks every day.”