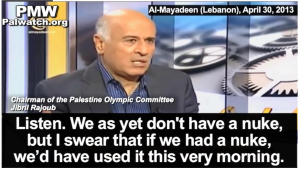 Jibril Rajoub, an avid supporter for violent terror attacks against Israelis, has been admitted to Ichilov hospital in Tel Aviv, despite the Palestinian Authority’s announcement 2 months ago that it discontinued all medical treatments in Israel for Palestinians.

According to the organization, Rajoub has repeatedly expressed his support for terror attacks and violence against Israelis, while emphasizing the importance of maintaining the backing of the international community. For this reason, he opposed suicide bombings in Tel Aviv, while encouraging targeting soldiers and settlers.

Rajoub has been admitted to Ichilov hospital in Tel Aviv, despite the fact that two months ago the Palestinian Authority announced that they would end all medical care for Palestinians in Israel. Thousands of Palestinians have been treated in Israeli facilities every year.

This decision was taken after Israel withheld from the taxes that it collects on behalf of the PA the amount equivalent to the salaries that the PA pays to the families of terrorists.

“The favoritism of the PA is striking,” said PMW’s senior analyst, Nan Jacques Zilberdik. “Not only do ordinary Palestinians have to forego medical care in Israel because the PA is adamant about paying high salaries to terrorists, Palestinians also have to witness one of their own leaders getting treatment in an Israeli hospital that for them is off bounds.”

As Chairman of the PLO’s Supreme Council for Youth and Sport Affairs, Rajoub recently also appealed to the Spanish club Atletico Madrid to cancel a match with the local team Beitar Jerusalem scheduled in Israel for May 21st.