When Palestinian elections were first discussed, the spotlight immediately turned to the struggle between Fatah and Hamas and the fear that under cover of the elections, Hamas would infiltrate the West Bank. But it soon became clear that the story was not Fatah against Hamas, but Fatah against Fatah.

What is at the root of the Fatah problem? Actually, there are two competing Fatahs.

The first consists of the PLO leadership of the “exile,” with its old roots in today’s Israel, for whom the formative event was the 1948 nakba. What matters to them is the “right of return” to pre-1967 Israel. Most of them moved to the Palestinian territories after Israel’s withdrawals in the wake of the 1994 Oslo Accords, where they established the Muqata, Arafat’s administrative center in Ramallah. Their primary audiences were the residents of refugee camps in Arab countries, largely in Lebanon.

The second is made up of the Palestinians in the West Bank, who have little or no attachment to the nakba, and what they want is the stabilization of their lives in the West Bank. Until the appearance of the “Tunisian leaders” of the PLO, the nakba issue was hardly mentioned by Palestinian residents in the West Bank. The nakba gained momentum when the PLO entered the territories, and the famous statues of “keys to the homes they abandoned” began to show up everywhere. This is the ethos of the Tunisians and the bureaucrats in Ramallah, where the PLO veterans landed, not the residents of Nablus, Bethlehem and Hebron.

A year ago, I visited Jenin and met with members of the Tanzim grassroots offshoot of Fatah. I was surprised to hear that they wanted one state with Israel, and had stopped believing in the Palestinian state they had fought for all their lives. The reason: They do not believe the “Tunisians” because they are “foreigners,” and the people of Jenin prefer to live with Israel rather than “Ramallah.”

The desire for one state is an opinion heard in broad circles in the West Bank. Palestinian writer Hamada Jaber reported that “according to the Palestinian Center for Policy and Survey Research, Palestinian support for the two-state solution has declined from 55% in 2011 to 39% in 2020 despite the support it has from all Palestinian parties and movements.”

In the past, the idea of one democratic state with the Jews was a ploy to erase Israel via a sophisticated formula, but today, as far as I can understand from conversations on the ground, Israel is a role model in the face of the disappointment from the collapsing Arab countries. We see this phenomenon in eastern Jerusalem, and another aspect of it is the sentiment among Israeli Arabs: “We don’t want to destroy Israel, but to benefit from it.”

A fresh example of the differences between “Tunisians” and locals can be found in an interview given recently by former Palestinian Authority Prime Minister Salam Fayyad to the daily al-Quds. He spoke at length about the needs of the Palestinians in the territories but did not mention a word – or half a word – about the “right of return,” the “struggle,” etc. – slogans propagated by the Tunisians.

The appearance of Fayyad on the political scene is significant. He announced his candidacy as part of an independent list, not in a Fatah context. In fact, even when he was prime minister, he was not a Fatah member. His attempts to get into Fatah failed because the Tunisians accepted into service only locals who bought into the Fatah agenda. They saw Fayyad as an outsider pressed by the donor countries, who did not want to endorse the PLO agenda. Eventually, the Tunisians dumped him.

The phenomenon of an independent list outside of Fatah has more significance: it is the beginning of the end of the PLO’s hegemony in political life in the West Bank. A shocking incident occurred on March 11: Fatah expelled Arafat’s nephew, Dr. Nasser al-Qudwa, the head of the Yasser Arafat Foundation in Ramallah, over his attempt to organize an independent list for the Palestinian elections in May. The candidates on his list include prominent figures from among the Palestinian society – but not from the PLO.

I recently received a Fatah document detailing the criteria for candidates to participate in the elections. What caught my eye was the quota set for “locals” – at least a third, with the remaining two-thirds being “representatives of the history of the national struggle,” i.e., Tunisians. 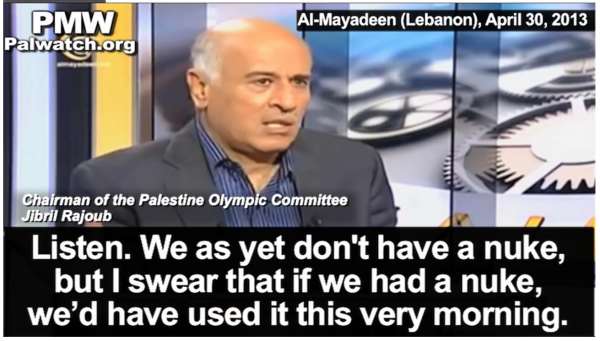 Head of the Palestine Football Association (PFA), Jibril Rajoub, is once again advocating the destruction of Israel. – Screenshot: PMW/YouTube

Of course, the leading challengers to PA leader Mahmoud Abbas represent the internal Tanzim – Marwan Barghouti and Mohammed Dahlan. Jibril Rajoub (photographed above), another example of the local population (who in the meantime has been enlisted in Qatar’s interests), recently said that the criterion for the post-Abbas leadership is to have spent time in an Israeli prison. In other words, whoever replaces Abbas can only come from the ranks of the local Tanzim – which means the end of Tunisians’ rule.

Whether there is an election in May or not, the demon is out of the bottle, and the fight will not be between Hamas and Fatah but within Fatah itself.

Pinhas Inbari is a veteran Arab affairs correspondent who formerly reported for Israel Radio and “Al Hamishmar” newspaper.
He currently serves as an analyst for the Jerusalem Center for Public Affairs.

This article was originally published by the Jerusalem Center for Public Affairs and also featured on JNS.org.