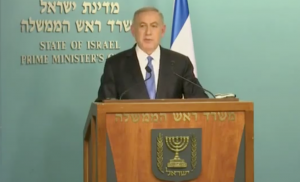 Israeli officials spanning across the political spectrum responded to US Secretary of State John Kerry’s speech after the American official outlined his vision for Middle East peace in Washington DC Wednesday.

Kerry claimed an historically right-wing government in Israel is pushing their nation toward annexation of the West Bank, intentionally eroding the viability of a Palestinian state through its settlement enterprise with the goal of creating a “permanent one-state reality.”

Shortly after the conclusion of the speech, Prime Minister Benjamin Netanyahu described Kerry’s focus on Israeli settlements as obsessive, saying his “biased” comments ignored the “root of the conflict.”

“For more than an hour, Kerry obsessed over the issue of settlements and hardly touched on the root of the conflict – Palestinian resistance to a Jewish state within any borders,” the premier said.

Coalition partner and leader of the pro-settlement faction in the Knesset, Education Minister Naftali Bennett (Bayit Yehudi), also remarked on Kerry’s speech, saying that Israel should not support the establishment of a Palestinian state.

“If it was up to me, we would not allow the establishment of another terror state in the heart of the country,” Bennett said, rejecting Kerry’s call to preserve a two-state solution.

Opposition leader in Israel’s parliament, Zionist Union MK Issac Herzog, was much more conciliatory towards the secretary, calling Kerry a “great friend” who has shown “true concern” about Israel’s future.

“John Kerry has always been a great friend of Israel and will always be. His speech expresses true concerns about Israels well-being & future,” Herzog wrote in a tweet.

Kerry’s speech came less than a week after the United States abstained from vetoing an anti-settlement resolution passed in the United Nations Security Council.

Kerry claimed in his speech Wednesday that the US’s decision not to veto the motion, known as resolution 2334, was a positive step in the pursuit of peace between the two parties.

But Israel envoy to the UN Danny Danon rejected Kerry’s assertion, saying the Obama administration’s abstention at the UNSC damaged prospects for ending the conflict between Israel and the Palestinians.

“To coordinate anti-Israel steps with the Palestinians and to advance one-sided resolutions against Israel at the Security Council is not support for Israel, it’s the opposite,” Danon said.

“The Obama administration acted against Israel at the UN and any statement suggesting otherwise is a distortion of reality,” he charged.

“Speeches, declarations and one-sided UN resolutions will not advance peace in our region, but rather condemnation of terror, a halt to incitement and a return to direct negotiations will,” the UN envoy added.

Is Israel’s policy of building civilian communities in the West Bank the reason there’s no peace agreement with the Palestinians? Or would there still be no peace even if Israel removed all of its settlements and evicted Israeli settlers, as it did in Gaza in 2005?