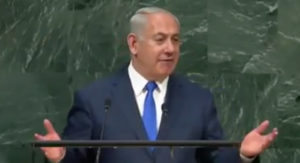 “I spoke last year about this profound change. Look at what happened since. Hundreds of prime ministers and foreign ministers and other leaders have visited Israel, many for the first time,” he said. “I haven’t visited Antarctica yet. I want to go there, because I heard that penguins are also enthusiastic supporters of Israel.”

Netanyahu slammed the UN for its anti-Israel bias, noting the but stated that that bias was slowly changing.

PM Netanyahu on @POTUS Trump’s speech at #UNGA: In over 30 years in my experience w/ the UN I never heard a bolder or more courageous speech

Netanyahu addressed the Iranian threat. He praised Trump’s speech at the UNGA earlier Tuesday. “I have listened to countless speeches in this hall. But I can say this: None were bolder, none were more courageous and forthright, than the one delivered by President Trump today.”

“Iran vows to destroy my country every day,” he said. “Iran is conducting a campaign of conquest across the Middle East, and Iran is developing ballistic missiles to threaten the entire world.”

“The restrictions placed on Iran’s nuclear program have a sunset clause,” he explained. “It means that in a few years, those restrictions will be automatically removed, not by a change in Iran’s behavior, not by a lessening of its terror or its aggression. They’ll be removed by a mere change in the calendar. And I warned that when that sunset comes, a dark shadow will be cast over the entire Middle East and the world, because Iran will then be free to enrich uranium on an industrial scale, placing it at the threshold of a massive arsenal of nuclear weapons.”

He compared the Iranian nuclear threat to the North Korean nuclear threat. “In the last few months we’ve all seen how dangerous even a few nuclear weapons can be in the small rogue regime. Now imagine the danger of hundreds of nuclear weapons in the hands of a vast Iranian Islamist empire, with the means to deliver them anywhere on earth,”

Netanyahu said that the Iran nuclear deal will have the same result as a similar deal with North Korea, which resulted in the rogue state acquiring nuclear weapons.

The prime minister called on world powers to either “fix it or nix it.”

“Nixing the deal means restoring massive pressure on Iran, including crippling sanctions, until Iran fully dismantles its nuclear weapons capability. Fixing the deal requires many things, among them inspecting military and any other sites which are suspect, and penalizing Iran for any violation. But above all, fixing the deal means getting rid of the sunset clause.

“And beyond fixing this bad deal, we must also stop Iran’s development of ballistic missiles, and roll back its growing aggression in the region.”

Netanyahu said that he had a “simple messages” for Iranian dictator Aytaolla Khameini. “The light of Israel will never be extinguished. Those who threaten us with annihilation put themselves in mortal peril.”

“As long as Iran’s regime seeks the destruction of Israel, Iran will face no fiercer enemy than Israel.

“But I also have a message today for the people of Iran. You are not our enemy. You are our friends,” Netanyahu said.

“One day, my Iranian friends, you will be free from the evil regime which terrorizes you,” he said. “When your day of liberation finally comes, the friendship between our two ancient peoples will surely flourish once again.”