Beside the obvious empty parrot cage police notice hat that may have been knocked off robber’s head while tackling the pet. DNA sample leads detectives to parrot poacher.

Police were able to locate and detain a man who robbed a home in southern Israel after the burglar accidentally left his hat behind due to a fierce struggle with the house’s pet parrot. The bird has yet to be found, and it is suspected thief took the pet away with him and sold it to someone else. 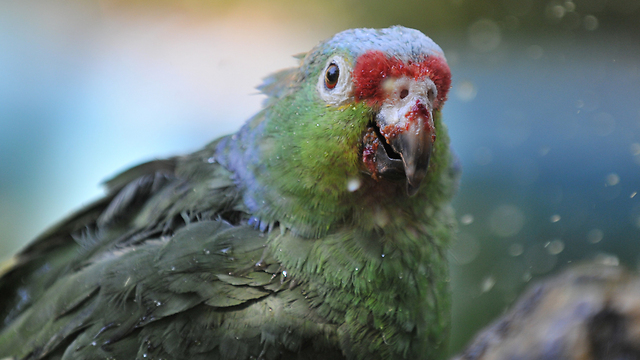 About a month ago, a resident of one of the communities in southern Israel filed a complaint with the police after his home was broken into. He said that in addition to the money that was taken away, his pet – an African Grey Parrot – was also missing. Police detectives arrived at the man’s house following the complaint, where they spotted the parrot’s cage sitting among numerous scattered feathers.

The detectives assumed that the feathers were plucked from the parrot during a battle that ensued while the thief attempted to steal the pet. Not far from the cage, a baseball cap was found lying on the floor. When asked whether the hat was his, the home owner responded he has never seen it before.

Police speculated the hat belongs to the burglar and fell from his head while struggling with the parrot. Apparently the thief panicked when the parrot screamed, and was concerned the noise would alert and lead neighbors to the scene, and so he took the parrot with him, but unfortunately left his hat behind.

The man was arrested, and denied any relation to the incident. However it was stated that an indictment against the suspect will be filed soon.

The cap was sent to forensic examination and yielded DNA remains of the suspect. Detectives found the same DNA sample in the police database, which led to a 30-year-old man who was convicted in the past for similar crimes.

Police claimed that the case was solved thanks to the brave parrot that fought with the thief and knocked off his hat. Unfortunately, the parrot itself has yet to be found, and it is suspected it was sold by the burglar.