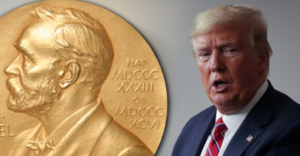 Trump has been added as a candidate for the prize in recognition of his role in brokering the soon-to-be signed Abraham Accords, normalizing relations between Israel and the United Arab Emirates.

The signing of a second Israeli Peace agreement. This time with Kosovo & Serbia, on Sept 4. 2020 in Washington, again facilitated by US President Donald Trump. – Twitter

The report comes hours after the Trump administration announced that it will host the signing of the Abraham Accords at a special ceremony at the White House next Tuesday.

President Trump was nominated for the prize by Norwegian MP Christian Tybring-Gjedde.

“For his merit, I think he has done more trying to create peace between nations than most other Peace Prize nominees,” Tybring-Gjedde told Fox News.

“I’m not a big Trump supporter,” he added. “The committee should look at the facts and judge him on the facts – not on the way he behaves sometimes. The people who have received the Peace Prize in recent years have done much less than Donald Trump. For example, Barack Obama did nothing.”

Another great day for peace with Middle East – Muslim-majority Kosovo and Israel have agreed to normalize ties and establish diplomatic relations. Well-done! More Islamic and Arab nations will follow soon!

In his letter to the Nobel Committee nominating Trump, Tybring-Gjedde wrote: “As it is expected other Middle Eastern countries will follow in the footsteps of the UAE, this agreement could be a game changer that will turn the Middle East into a region of cooperation and prosperity.”

Tybring-Gjedde also cited Trump’s “key role in facilitating contact between conflicting parties and … creating new dynamics in other protracted conflicts, such as the Kashmir border dispute between India and Pakistan, and the conflict between North and South Korea, as well as dealing with the nuclear capabilities of North Korea.”

“Indeed, Trump has broken a 39-year-old streak of American Presidents either starting a war or bringing the United States into an international armed conflict. The last president to avoid doing so was Peace Prize laureate Jimmy Carter.”

The Nobel Prize is granted each year on December 10th, after a list of nominees has been collected and a short list created by the Nobel Committee. The final choice is typically made in October by the Nobel Institute.

If Trump is selected by the Institute, he will be the fourth American president to receive the Nobel Peace Prize, following Theodore Roosevelt in 1906, Woodrow Wilson in 1919, and Barack Obama in 2009.

…and still fools call Donald Trump a racist, an anti-Semite, and a facilitator of violence. Ironically, this award doesn’t include his achieving Saudi Arabia opening their airways for El Al…or Sudan doing the same…OR the new peace with Muslim-majority Kosovo.

There are so many things President Trump has done for the Jewish People. Here’s a small list: 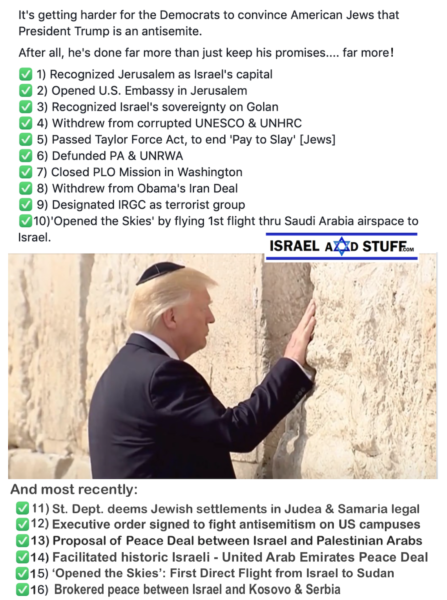