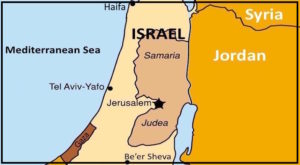 
On June 10 a web site called opiniojuris.org circulated an article entitled An Open Letter to the Israeli Government,  which claims that Israel’s plans to annex certain parts of the disputed territories in Judea and Samaria (the “West Bank”) per se violate international law. The letter was electronically signed by a number of lawyers, legal “scholars,” and “human rights experts.” However, only some of the letter’s signatories have experience in international law, many do not. In fact, anyone claiming to be an “expert” or “scholar” was able sign the letter simply by sending an email: there was no vetting to verify a signer’s credentials.

Despite the letter’s lack of transparency and credibility, it is being touted by voices on social media such as the New York Times’ Israel bureau chief David Halbfinger, former U.S. Special Envoy Martin Indyk, Palestinian diplomat Saeb Erekat, and others.

The letter is clearly a political statement rather than an actual legal analysis: it makes vague reference to “rules of international law” without actually identifying which rules the writers have in mind. The letter’s primary claim is that annexation in situations that involve force is per se (always and by definition) illegal. Aside from being unspecific and misleading, the claim finds no support in the relevant international treaty (Geneva Convention IV, art. 47) nor in the surrounding case law.

Indeed the question of whether annexation is right or wrong is hotly contested even among Israelis. Yet whether annexation is right and whether it is legal are two different questions. The law is not some kind of popularity contest, like American Idol or Eurovision, and journalists should not imply otherwise to the public by touting a vague and misleading letter. A journalist should instead present credible legal opinions on both sides of the issue and educate the public as to what legal analysis truly requires: a rigorous examination of the original source materials.

What Does the Law Say?

The relevant legal question is actually not whether there is use of force, but whether there is violation of state sovereignty (forceful or otherwise). This is apparent in the Cook Islands(1900),  Island of Palmas Arbitration (1928), and  Eastern Greenland (1933) cases, all three of which were annexed under circumstances that did not involve sovereignty violations.  Other cases did involve sovereignty issues but were completed via mutual consent, such as America’s annexation of Texas and Hawaii, while still others do involve violations of sovereignty and of international law, such as Russia’s 2014 annexation of the Crimea.

I recently addressed this topic in detail on ILTV news:

In this case, Israel is considering annexation of specific areas within a region that is historically called “Judea and Samaria” and which is not subject to any existing sovereignty. This territory was previously held by Jordan, which had conquered it by force in an unsuccessful attempt to destroy Israel in 1948. During its 19 year occupation, Jordanrenamed the region the “West Bank,” but never declared sovereignty over it, nor would such a declaration have been valid.

Prior to Jordan’s occupation, Judea and Samaria (or the “West Bank”) was previously held by the British Mandate. The British had acquired the area from the Ottoman Empire, which was defeated in World War I and no longer exists. The Ottomans, in turn, had acquired the region by force from previous conquerors. In fact, the Ottomans were the last of a long chain of conquests going back two thousand years – ultimately to the ancient Jewish Kingdom of David.

In short, unless one is attempting to defend the sovereignty of the now non-existent Ottoman Empire, there is simply no issue of valid national sovereignty at play.

Furthermore, the Geneva Conventions may not even apply at all. Legal scholars such as Eugene Kontorovich point out that bilateral treaties between Israelis and Palestinians have the effect of overruling the Geneva Conventions by mutual agreement, and that the history of the region makes the term “annexation” not even appropriate to describe these events. Legal scholar Avi Bell explains that the current events are almost entirely symbolic, and amount to little more than political posturing.

Is it Right or Wrong?

Whether Israel may annex and whether Israel should are two different questions, with the latter being hotly debated even among Israelis. Surprisingly, opponents of the plan include not only left leaning Israelis but also a section of right-wing Israelis who fear that this process will lead to a Palestinian state, including some Jewish settlers who worry that their homes may actually end up inside such a Palestinian state. Meanwhile, the annexation plan has some surprising support from niches of Palestinians who expect to end up receiving Israeli citizenship: they are currently citizens of the Palestinian Authority government, which many Palestinians find to be oppressive, corrupt and not a true democracy.

One misconception is that Israel is planning to annex the entire West Bank, thus foreclosing the possibility of a future Palestinian State. In fact, the specific areas that Israel is considering annexing are already primarily Jewish, and already under Israeli control. Indeed, the Oslo Accords were signed 25 years ago with the expectation that these particular areas would eventually become a part of Israel under any future peace agreement.

Some proponents feel that by moving annexation forward, Palestinian leadership will finally feel pressure to come to the negotiating table and cease its long standing practice of refusing peace offers.  Meanwhile, some annexation opponents feel that this process is merely political pandering to parts of Israel’s right wing, and is not worth the cost in international condemnation and diplomatic penalties that Israel may suffer.

Whatever your opinion, you have the right to form it with a full and fair understanding of the facts, the law and the overall situation. And journalists have a professional duty to give you that opportunity.

As CEO of HonestReporting, Daniel Pomerantz manages the entire organization, its staff and programming.

He began his career as an attorney in the United States where he worked for high profile law firms in New York and Chicago before starting his own law practice, and later moving to Israel.

Daniel also serves on the adjunct faculty at Bar Ilan University in Tel Aviv and the Interdisciplinary Center University (IDC) in Herzliya, is a contributor to The Daily Caller and The Federalist, and is a frequent on-air panelist for i24 News and ILTV News.

HonestReporting monitors the news for bias, inaccuracy, or other breach of journalistic standards in coverage of the Arab-Israeli conflict. It also facilitates accurate reporting for foreign journalists covering the region.

HonestReporting is not aligned with any government or political party or movement.