Forum, “Our region will not see peace unless we see a resolution to the Palestinian issue.”

Qatar’s emir, who has thrown his state’s riches behind Arab uprisings, said on Monday that the emergence of ‘people power’ had put Arabs in direct confrontation with Israel and made a resolution of the Israeli-Palestinian conflict more pressing. 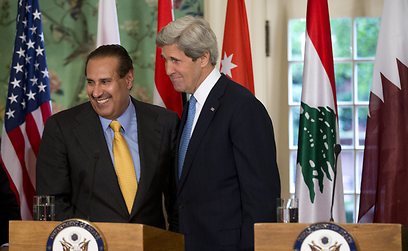 “We heard in the past that reform (in the Arab world) must wait until a peaceful settlement with Israel is achieved, but everybody should realize that such belief is now unfounded after the Arab Spring revolts,” Sheikh Hamad bin Khalifa al-Thani told a conference in the Qatari capital.

“The reason is that the Arab Spring has today put Israel in direct confrontation with the Arab people, not only with their rulers. These people will no longer accept that negotiations are the goal in themselves.”

He added: “Our region will not see peace unless we see a resolution to the Palestinian issue.”

Sheikh Hamad’s call for the establishment of a Palestinian state with east Jerusalem as its capital was broadly in line with a long-standing Saudi plan.

“Israel must not lose this important opportunity to seek peace. Israel must withdraw to the ’67 borders, with an independent state established with Jerusalem as its capital,” Sheikh Hamad told the Doha Forum, attended by a number of leaders including Tunisian Prime Minister Ali Larayedh.

He made no mention, however, of the Arab League’s acceptance last month that Israelis and Palestinians may have to swap land in any peace deal, to allow Jewish settlements in occupied territory to become part of Israel.

That step has been praised by US Secretary of State John Kerry, due in the region this week in a drive to revive peace talks that have been frozen since 2010.

Qatar, a major Gulf gas producer and ally of the United States, has used its wealth to back pro-democracy protests that have toppled four Arab heads of state since 2011, and to support the mainstream Islamist groups that have been catapulted to power.

“We are not trying to show off our achievements in Qatar, but what we did was something important,” Sheikh Hamad said.

Qatar has made no secret of the fact that it is arming Syria’s rebels, although rebels and officials familiar with the uprising say it has tightened the flow, in concert with the CIA, to keep the weapons out of the hands of Islamist fighters linked to al-Qaeda.

Sheikh Hamad slammed what he called the world’s failure to “make the Syrian regime listen to reason”, adding: “The international community can no longer stand still as we watch the Syrian crisis unfold.”

Yet despite its vigorous defense of people power across the Arab world, Qatar has yet to empower its own 1.9 million people in the same way.

It has no elected parliament or organized political opposition and restricts freedom of expression, leading to widespread self-censorship among local media.

In November, a Qatari court jailed a poet for life on charges of criticizing the emir and inciting revolt.

In his speech, the emir called for more dialogue and the establishment of institutions that support gradual democratic reforms, but sidestepped questions related to possible elections in his country.

“The current situation is a critical one for the Arab world. People are now calling for broad reforms, mainly participation in public life. We need to listen to what others have to say to establish dialogue, rather than foster violence,” he said.

“The concept of democracy means much more than casting ballots. We need to instill change gradually through reform and dialogue. Change that takes place too quickly and that does not take into account the complex fabric of societies is dangerous.”