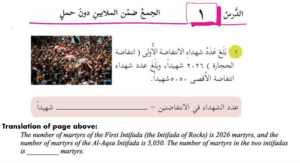 An int’l research and policy institute that evaluates school curricula for racial tolerance reports its study confirms how Palestinian students are required to be well-versed in the message of violence and hatred of Jews, or Israel, to pass PA matriculation exams to attain a high school certificate.

The Israeli branch of the Institute for Monitoring Peace and Cultural Tolerance in School Education (IMPACT-se), an international research and policy institute that analyzes school textbooks throughout the world, has looked into the high school matriculation exams held in the Palestinian Authority last year, which were supposedly based on new books that are free from incitement against Jews or Israel – and found that was not the case.

PA indoctrination of children. Palestine is written in place of Israel. – Photo: IMPACT-se

This is the first time that the content of the PA matriculation exams has been made publicly available.

The IMPACT-se study used international standards of acceptance of others, set by UNESCO, to evaluate 26 PA matriculation exams. The team found that 75% of the exams in humanities and social subject included radical content that promoted violence or incitement to violence and hatred of others, the same material that was taught in classrooms and on the exam prep sites operated by the Palestinian Authority Education Ministry. The researchers did not find any material on the exams that dealt with reaching a sustainable peace with Israel.

The report pointed out a few exam questions that promoted messages it characterized as problematic. The geography exam asked students what countries bordered the Jordan River basin, and the multiple choice answers included: Syria, Lebanon, Jordan, Palestine, Egypt, and Iraq. Israel was not listed.

The Arabic language exam asked questions about the poem “A Refugee’s Will,” which calls for an armed return to the cities of Israel, “with weapons in hand,” to liberate all Palestine. The PA Education Ministry website also put out study material for the poem, which reads: “The poet is saying that the homeland can only be liberated through armed resistance.” The site explains that “the expression ‘with weapons in hand’ is a metaphor for jihad and resistance, and the term ‘a weapon in your hand’ symbolizes [the idea] that what was forcibly taken can only be retrieved through force.”

A history exam question about the Arab Spring claimed that the anti-regime demonstrations in nations affected by the Arab Spring were a Western-Zionist scheme to destabilize Arab unity.

An essay question, also from the history exam, asked students to define the term “national identity.” The correct answer, as it appears in the study manuals, perverts the definition of the term and leaves out any vision of peace, reconciliation, or cooperation between neighboring nations.

The Islamic religion exam provided yet another example. The exam included questions about jihad, which the PA curriculum teaches in the Palestinian context. Students are encouraged to see participation in the violent conflict as a religious obligation. As an example, the exam offered the example of the clashes between the Murabitun (Turkish-funded Palestinian rioters who were bused into the Temple Mount compound on a daily basis to harass Jewish visitors to the Mount) with the Israel Police at Al-Aqsa mosque.

IMPACT-se CEO Marcus Sheff said when the results of the study were announced that “Palestinian students go through 12 years of radical education, starting in the first grade, when they are asked to learn the Arabic letter ‘h’ from the words ‘shahid’ and ‘hujum’ [attack], and through the 12th grade, with its messages of extremism and violent struggle.”

Chief Operating Officer of IMPACT-se Arik Agassi added, “The Palestinian matriculation exams require the study of material that incites to hatred, violence, and conflict. No Palestinian student can pass the exam without being versed in hatred of others.”