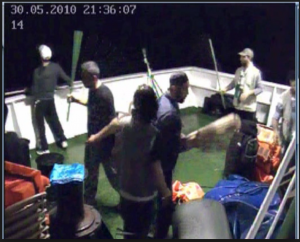 According to the Post, the plaintiffs were on board the American-flagged Challenger 1 during the incident in which Israeli commandos raided six Turkish boats trying to reach Gaza in 2010, an event that still affects relations between Turkey and Israel. Their attorneys said the injuries they suffered including partial loss of sight caused by a stun grenade explosion and a broken nose from a rubber bullet.

Plaintiff Mary Ann Wright told the Post that she had observed commandos “taking women and shoving them down onto passageways, pushing their faces into shards of glass and binding them up”.

The newspaper noted that US law does not permit lawsuits against foreign governments with some exceptions. The case “may turn on whether a court finds that the action against a US-flagged ship in international waters should be treated as an assault in the United States or that Israel’s conduct was so egregious that it is not entitled to immunity,” the Post reported.

The Mavi Marmara incident strained relations between Turkey and Israel, and the two countries have only recently shown signs of attempting to normalize ties. Just this month, Turkish President Recep Tayyip Erdoğan said his country must accept that it needs Israel.

A reminder what the flotilla was all about: