Report: Amid paralyzing sanctions, Hezbollah readying for war with Israel 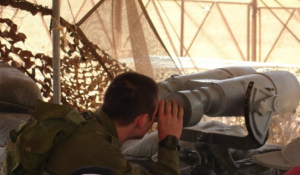 The Daily Beast reports three Hezbollah commanders admitted how salaries for combatants have been halved, but the terror group is still strong militarily and talked about preparing for the next war, “The sanctions now have us preparing for dealing with the Israeli front. We will fire the first shot this time,” said one commander.

Hezbollah’s commanders, hurting from sanctions on Iran, are preparing for war with Israel, the Daily Beast reported.

Speaking to the Daily Beast, Hezbollah’s “Commander Samir” (not his real name), who commands 800 terrorists on the Israel-Lebanon border, said: “The sanctions now have us preparing for dealing with the Israeli front. We will fire the first shot this time.”

Salaries for Hezbollah terrorists have been halved, three of them told the Beast, but the terror group is still strong militarily.

According to Samir, the next war with Israel will be “nothing like” the previous wars, since Hezbollah’s positions in the Syrian Golan Heights allow it to open a second front against Israel, and the terror group now has drone capabilities, as well as anti-aircraft and anti-naval weapons.

“Our wish before the war in Syria was to go and open a front in the Golan but [the Syrian Government] set a red line,” he told the Daily Beast. “Now there are no red lines.”

“The Iranians have said either we all sell oil or no one does.” He also warned that Israel would pay the price for any other country’s initiative: “If any missile hits Iran, it will be treated like Israel did it.”

Though Hezbollah is still fighting in Syria, it trains terrorists in both Iraq and Yemen. Samir said that even though Iran and Hezbollah took opposite sides in the Syrian civil war, they have moved past that, and Iran is now providing training and support for both Hamas and the Palestinian Islamic Jihad terror groups.

“Islamic Jihad never shoots before calling the Iranians,” he said, claiming that the Gaza terror group’s threat to fire at Haifa was “a message from us and Iran.”

Another Hezbollah terrorist, “Assir,” told the Beast: “People who finish their mission in Syria go to the south. There are some units in Syria but a lot go back to Lebanon or to the Golan. Thousands have come back.”

Ahmad Moussalli, a political science professor and specialist in Islamic movements at the American University of Beirut, told the Daily Beast that he believes war with Israel is not imminent: “Syria and Lebanon will be engaged in war once Europe or Iran completely pull out of the nuclear agreement. The issue with Israel is a rather big one. So yes there is pressure, there is the possibility of war but I don’t think it is near.” He added: “Are they [Hezbollah] ready? Yes they are.”

Ayman, another Hezbollah commander, told the Beast that even though a strike against Iran is a red line, Hezbollah strongly wants to avoid conflict.

Israeli Prime Minister Binyamin Netanyahu’s office declined the Daily Beast‘s request for comment. The IDF declined comment as well, explaining that the issue “is too complex an issue to explain on the phone or in a statement.”