Report from Kuwait: Assassination attempt on Netanyahu in Kenya thwarted 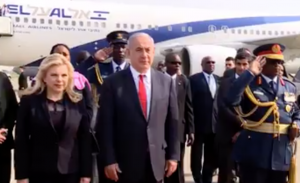 According to a report in the Kuwaiti-based Al Jarida newspaper, Kenyan security forces foiled an attack targeting Prime Minister Binyamin Netanyahu’s convoy during his visit to Kenya earlier this week. A senior security official told the paper that Kenyan police altered the convoy’s route just before its departure from the Nairobi airport.

The change was so sudden it sparked an argument between Netanyahu’s body guards and local security forces, according to the paper.

It was later revealed that Kenyan intelligence services had uncovered a plot to attack the Prime Minister’s convoy on its way from the airport to a Nairobi hotel.

The report claims two people were arrested in connection with the planned attack.

Israel’s PM speaks of his thoughts about Yoni as he flies over Kenya: