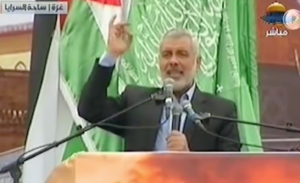 The deal, signed by the two factions in Egypt on Thursday stipulates that Hamas is to end its terror activity against Jews in Judea and Samaria. In exchange, Fatah and Hamas will coordinate future peace agreements with, and war efforts against, Israel.

According to Asharq Al-Awsat, a senior Hamas official noted that the agreement includes “a hinted understanding that the lull in fighting applies also to areas in the West Bank.”

“We want to allow an opportunity for an agreement, and we will maintain Hamas’ commitment to true partnership, whether or not the harassment and arrests [by the PA] stop and prisoners are freed,” the official told the paper.