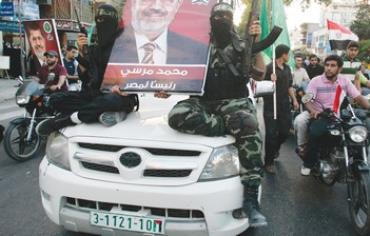 “Security authorities have learned that the military wing of the Hamas movement trained several people to undertake car bombing operations and trained various others to make explosives,” said a presenter on state television.

“The military wing of the Hamas movement provided various Salafi jihadists and also other religious currents with 400 landmines. The security apparatus documented this and they will be arrested.”

The Brotherhood’s Mohamed Morsi was overthrown as Egyptian president by the military in July following mass protests.

Egypt extended a state of emergency by two months on Thursday because of the security situation, the presidency said in a statement.

The army-backed government has accused Brotherhood leaders of inciting the violence and authorities have imposed a dusk-to-dawn curfew.

Militant attacks against security forces in the lawless Sinai peninsula that borders Israel and the Hamas controlled Gaza Strip have also increased since Morsi was toppled.

Eleven people were killed and seventeen were wounded Wednesday by two explosions in the northern Sinai Peninsula in the town of Rafah.

Most of the casualties were Egyptian soldiers and Ansar Bayt al-Maqdis a group affiliated with al-Qaida took responsibility for the attacks.